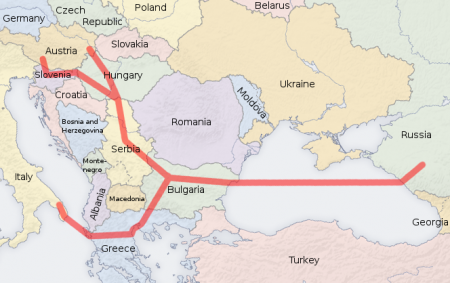 Because should Russia find a way to completely bypass Kiev as a traditional transit hub for Russian gas, it would make the country, and its ongoing civil war, completely irrelevant not only for Russia, but worse, for Europe, the IMF, and Ukraine’s staunch western “supporters and allies” as well.

Showing just how Europe perceives the Russian “South Stream” threat was a comment from a recent NYT article, in which Günther Oettinger, Europe’s top energy official, was quoted as saying that the Ukraine crisis “has slowed down our progress on South Stream considerably… We can’t just give in to the Russians every time.” Alas, since the Russians control the all important gas, Europe has zero choice.

This explains why even as the western media finally remembered over the weekend there was a Ukraine civil war going on following an advance by the Kiev army to retake some rebel strongholds in the Donbas region, with some wondering what if anything Putin would do in retaliation, what Putin, or rather his envoy Sergei Lavrov were actually doing, was completely ignoring the Ukraine situation (where the West has long since conceded the loss of Crimea to the Kremlin) and instead focusing on securing the successful launch of the South Stream (remember: the second South Stream goes online, Ukraine becomes irrelevant). And since Russia already signed another historic agreement with Austria in June, which positioned the AAA-country (with some surprising emerging bank troubles subsequently) squarely against its fellow European peers, it was the turn of the other South Stream countries, namely Bulgaria.