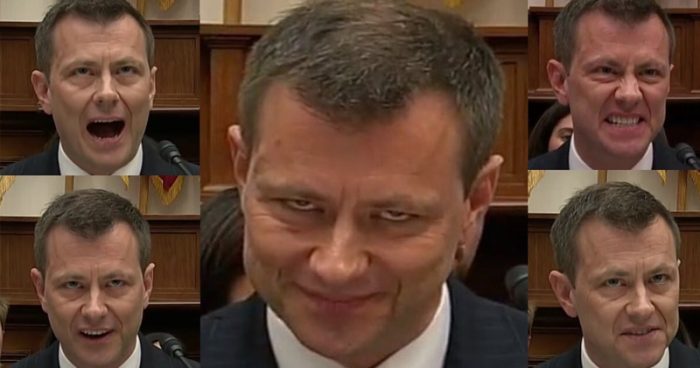 (Infowars) Many on social media are pointing out FBI Agent Peter Strzok’s weird facial expressions during his congressional testimony Thursday.

The embattled Strzok appeared to make smug and contemptuous facial gestures, as he was grilled before House Judiciary and Oversight Committees over numerous anti-Trump text messages sent during his time with FBI Special Counsel Robert Mueller’s probe into Russian meddling in the 2016 election.

I foresee this being used as a meme or gif. #Creepy #Strzok #FoxNews pic.twitter.com/uUHC7wv7EP

Here’s the face of a wild animal backed in the corner.

I present to you the face of #PeterStrozk

The self-righteous contempt on Peter Strzok’s face is unmistakable pic.twitter.com/qB3swQxBcc

The Devil is in that face. #Strzok pic.twitter.com/vo92HrtAYJ