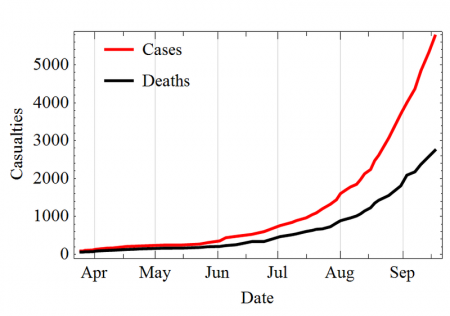 Did you know that the number of Ebola cases in Liberia and Sierra Leone is approximately doubling every 20 days? People are dropping dead in the streets, large numbers of bodies are being dumped into the rivers, and gravediggers can hardly keep up with the the number of corpses that are being delivered to the cemeteries. As you read this, life is pure hell in many areas of West Africa, and now the CDC is warning that things may get far, far worse in the very near future. According to the CDC, the number of Ebola cases could potentially soar to 1.4 million by the end of January. Of course the CDC says that this is a “worst-case scenario”, but for our health officials to even suggest that such a huge number is possible is quite chilling. We are now being told that the fatality rate for this Ebola outbreak has risen to 71 percent, and so most of the “cases” will eventually turn into deaths. If we do eventually see 1.4 million cases of Ebola in West Africa, it is incredibly naive to think that it will not spread to other parts of the globe as well.

The World Health Organization has been trying to document the number of cases and deaths that are happening, but at this point even the WHO admits that the official statistics “vastly underestimate the magnitude of the outbreak.”

And for the first time, health officials are conceding that this crisis may never have an end point. A study that was published this week in the New England Journal of Medicine says that Ebola could potentially become endemic to West Africa. In other words, it could become a disease that is continually spread and that we have to deal with on a regular basis like malaria or the flu.

Hopefully this outbreak will be brought under control shortly. But at the moment there are no signs that this is happening. In fact, hundreds of health workers have contracted the disease themselves. And if current trends continue, the CDC warns that we could see up to 1.4 million cases of Ebola by the end of January…

“Extrapolating trends to January 20, 2015, without additional interventions or changes in community behavior,” such as much-improved safe burial practices, the researchers estimate that the number of Ebola cases in Liberia and Sierra Leone could be between approximately 550,000 to 1.4 million.

Over the past several weeks, there have been numerous reports of dead bodies lying in the streets of major cities over in West Africa.

“The true number of deaths will likely never be known, as bodies in the notoriously poor, filthy and overcrowded West Point slum, in the capital, Monrovia, have simply been thrown into the two nearby rivers,” WHO said in a separate statement.

No wonder Ebola is spreading so rapidly.

So far authorities have been able to keep this crisis mostly contained to just a few countries.

But what happens when we have over a million people running around with Ebola?

How in the world do we keep that contained?

That sort of exponential increase in cases makes it more likely that Ebola will become entrenched in West Africa, said Robert Murphy, a professor of medicine and biomedical engineering at Northwestern University.

If there are hundreds of thousands of Ebola cases, then “many more countries will have cases, and it won’t be just West Africa,” Murphy said. “There is so much mobility now, this can spread anywhere.”

If Ebola continues to spread like wildfire throughout West Africa, it is probably just a matter of time before it starts popping up in major cities in other areas of the globe.

If this were to happen in the United States, life would change for all of us almost overnight.

It is hard to put into words that kind of chaos that we are witnessing over in Liberia, Guinea and Sierra Leone right now. Panic and fear are everywhere, and the corpses just keep piling up. The following is an excerpt from a recent New York Times article…

The Ebola epidemic is spreading rapidly in Sierra Leone’s densely packed capital – and it may already be far worse than the authorities acknowledge.

Various models of the growth of the epidemic here “all show an exponential increase,” said Peter H. Kilmarx, the head of the Centers for Disease Control and Prevention team in Sierra Leone. “The conditions are amenable to Ebola spread.”

“Since last month, it’s every day, any minute and hour, and often, they are coming” to bury the Ebola dead, said Desmond Kamara, a police officer.

A cloudy stream drains from the area of the new graves into the slum, further frightening the residents.

“We are at risk, big risk,” said Ousman Kamara, a resident. “We have made many complaints.”

But the bodies, he said, keep coming.

“Even at night,” he said. “You stand here, and you see them coming.”

Could you imagine something like that happening in America?

At this stage of the crisis in West Africa, all existing treatment facilities are absolutely overwhelmed.

Because there are no more beds, large numbers of people with Ebola are being turned away. Many end up dying just outside of the walls of some of these clinics…

A new Ebola clinic opened in Monrovia this week, but bodies lay on the ground outside its walls. Ambulances filled with Ebola patients, some that have traveled seven hours to get there, are not unloaded. Without help to get them inside, the patients fall in the dirt, mere feet away from treatment.

If things are this bad already when we only have thousands of cases, what are things going to look like when we have more than a million cases?

A representative for Samaritan’s Purse admitted the other day that “it’s too late. Nobody’s going to build 100,000 beds.”

And it can be absolutely heartbreaking for health workers to turn away people that are dying.

The first person I had to turn away was a father who had brought his sick daughter in the trunk of his car. He pleaded with me to take his teenage daughter, saying that whilst he knew we couldn’t save her life, at least we could save the rest of his family from her.

Other families just pulled up in cars, let the sick person out and then drove off, abandoning them. One mother tried to leave her baby on a chair, hoping that if she did, we would have no choice but to care for the child.

I had to turn away one couple who arrived with their young daughter. Two hours later the girl died in front of our gate, where she remained until the body removal team took her away.

Those that are working on burial teams often see things that are even worse. Just consider the following example…

Dressed from head to toe in white protective suits and thick goggles, the burial teams try to stay safe, but nothing can shield them from the unspeakable horrors they’ve seen when they make their regular rounds. On Friday, Kiyee described what he saw when he entered a home:

“I took the key and opened the door and went in and saw a 6-month-old child licking on the mother’s skin,” said Kiyee. The mother was lying on her stomach. She had died from Ebola. The baby was searching for the mother’s milk. “Right away I started shedding tears.”

This is the kind of pure hell that we could see in the United States if Ebola starts spreading here.

Just because we have a more advanced medical system and better living conditions does not mean that we will be able to stop the spread of this virus.

In fact, some medical professionals are already warning that we are not prepared for an Ebola pandemic.

If cases of Ebola do start appearing in major cities throughout America, you will want to be prepared to stay at home as much as possible. There will not be any magic pill that you can pop that will “cure” you of this disease. It is a brutally efficient killer that does not show any mercy.

So let us hope that global health officials know what they are doing and that this pandemic will be brought under control soon.

But it would also be foolish not to prepare for the worst.