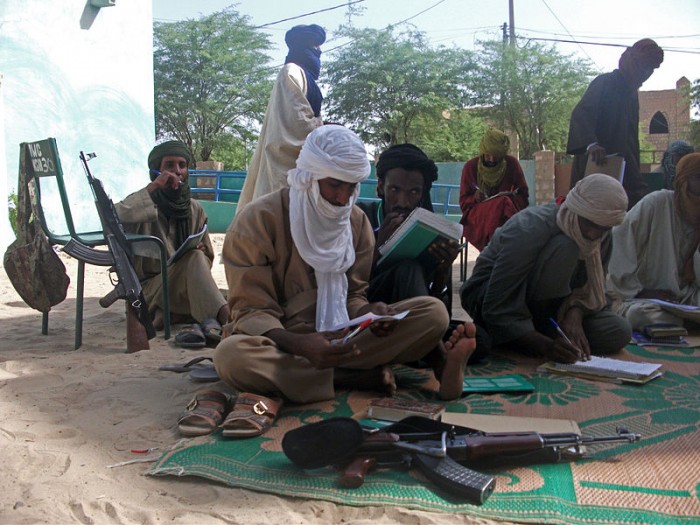 How do you deal with psychotic religious warriors that believe that they are offering a service to God by killing Christians? Ever since 9/11, we were endlessly told about what a great threat “al-Qaeda” was, but I don’t remember a single time when al-Qaeda ever marched a group of Christians out and beheaded them on camera. ISIS appears to be an entirely different animal than al-Qaeda ever was, and it is about time that we started taking them seriously. But the Obama administration is actually allowing Americans that went overseas to fight for ISIS to come back into the country and resume their normal lives. To me, that is absolutely insane. These are people that believe that they score major points with their god when they kill us. And they especially seem to relish the opportunity to kill Christians. Sadly, this is all part of a rising trend of Christian persecution all over the planet. Christian churches are being burned to the ground in places such as Egypt, India and West Africa, and earlier this month we witnessed a horrific incident during which more than a hundred Christians were mercilessly gunned down in Kenya. It is becoming increasingly dangerous to be a Christian, and it is only going to get worse in the years ahead.

You have to keep in mind that these ISIS fighters are actually convinced that they are the good guys. They don’t believe that what they are doing is evil. When they kill Christians, they are just doing what they believe their god wants them to do…

A shocking new video appearing to show at least 30 Christians being beheaded and shot by ISIS in Libya has been released.

The 29-minute video, titled ‘Until It Came To Them – Clear Evidence’, shows dozens of militants holding two separate groups captive, thought to be in the south and the west of the country.

At least 16 men, described by Islamic State as the ‘followers of the cross from the enemy Ethiopian Church’, are lined up and shot in a desert area while 12 others are filmed being forced to walk down a beach before being beheaded.

This follows another video in February of the beheading of a group of 21 Coptic Christians on the beach in Libya, though that terrain was rockier than the one shown in the latest film.

This video that was released makes it abundantly clear what these killers are motivated by. The following description of the audio on this latest ISIS video comes from CNN…

“All praise be to Allah, the Lord and cherisher of the world and may peace and blessings be upon the Prophet Mohammed. To the nation of the cross, we are back again on the sands, where the companions of the Prophet, peace be upon him, have stepped on before, telling you: Muslim blood that was shed under the hands of your religion is not cheap,” the narrator says in Arabic on the 30-minute video.

The narrator continues, “In fact, their blood is the purest blood because there is a nation behind them (which) inherits revenge. And we swear to Allah: the one who disgraced you by our hands, you will not have safety, even in your dreams, until you embrace Islam.”

Do you understand what is being said there?

They will not stop fighting until we all embrace Islam.

Not much room for negotiation there.

Meanwhile, other Islamic groups all over the planet are starting to take their cues from ISIS, and this is resulting in a rising tide of violence against Christians.

For example, recall the incident in the Mediterranean Sea the other day in which a dozen innocent Christians were tossed to their deaths…

When a rubber dinghy carrying around 100 African refugees across the Mediterranean began to sink, a Nigerian Christian prayed for his life in an innocent act that would end in the deaths of 12 fellow migrants.

One of the Muslims on board the rickety craft ordered him to stop, saying: ‘Here, we only pray to Allah.’

When he refused, a violent fight ensued and 12 Christians drowned when they were thrown overboard by the Muslim refugees.

Who in the world would do such a thing?

The only reason those 12 people were killed was because they were Christians.

“The Italian police have arrested 15 Muslims for throwing 12 people overboard and watching them helplessly drown in the Mediterranean,” said Rev. Graham in an Apr. 17 Facebook post.

He continued, “Why? Just because they were Christians! Because Islam has a deep and relentless hatred for people who bear the Name of Christ. These Christians were among a group of 105 people who were trying to escape war and poverty in Africa and were headed to Italy to look for work.”

It took only a few hours, but it was enough time for hundreds of radical Muslims in Niger, West Africa, to destroy dozens of churches and several Christian homes. Ten people lost their lives and hundreds were injured when Muslim mobs went on the deadly rampage in early January.

Now, three months later, Christians living there are moving forward, determined to still preach the Gospel despite the dangers.

In most of these attacks around the globe, those involved do not believe that they are doing anything wrong.

Rather, most of the people involved in this violence believe that they are actually offering a service to their god.

And the tide is turning in the western world as well. I don’t know if you have noticed, but it is quite socially acceptable to make jokes about Christians and to portray them as bad guys and lunatics in movies and on television shows. Evangelical Christians are even being labeled as “potential terrorists” in official government documents, and every trace of the Christian faith is being pushed out of public life in the United States. I discussed how this is being done in the U.S. military in this recent article, but just about everywhere you look Christianity is being pushed into the shadows. The disdain for the faith of our forefathers has reached a crescendo, and it is not going to be any easier to be a Christian in this country in the years ahead – that is for sure.

In fact, I am sure that there will be some extremely negative comments about Christians and the Christian faith following this article. But that is okay – we need an honest exchange of views in this nation. May the truth triumph in the marketplace of ideas, and if you would like to add to this discussion, please do so by leaving a comment below…