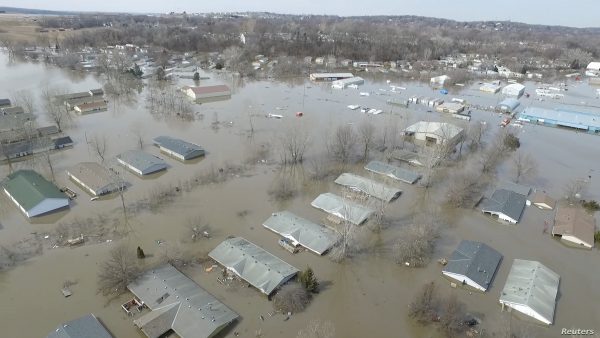 The wettest 12 months in all of U.S. history was followed by the second wettest May on record, and for some parts of the Midwest the month of June will be even worse. Some portions of Ohio and Indiana have gotten 10 more inches of rain since Friday, and more rain is literally falling on the Midwest as I write this article. When I describe what we have witnessed as “torrential rain of Biblical proportions”, I am not exaggerating even a little bit. Even before we got to the month of June, farmers in the middle of the country were already dealing with a disaster unlike anything that they had ever experienced before. And just when everyone thought that it couldn’t possibly get any worse, it did. Since Friday, the rainfall totals in the Ohio Valley have been staggering…

As much as 10 inches of rain has fallen in the Ohio Valley since Friday, causing flooding, necessitating water rescues and creating a mudslide near Lexington, Kentucky.

Parts of southern Indiana have seen 10 inches of rain, while up to half a foot fell in parts of Ohio. Other parts of Kentucky have reported 5 inches.

More rain is coming for the rest of the week, and that is exceptionally bad news for Midwest farmers.

At this point, millions of acres that farmers had intended to plant with corn will go completely unused. And according to a Washington Post article that was republished by MSN, corn futures are surging because traders are anticipating “an impending shortage” of corn…

Ohio trailed behind, with 68 percent of its corn planted, South Dakota had 78 percent, and Michigan and Indiana each had 84 percent of their hoped-for acres planted. Last week, the USDA lowered the projected total yield to 13.68 billion bushels (last year’s corn yield was 14.3 billion bushels). And as of Monday, in anticipation of an impending shortage, corn futures continued to trade at their highest level since June 2014.

I know that the USDA is projecting that somehow we will get to 13.68 billion bushels of corn, but a lot of experts are convinced that the USDA’s reduced projection is still wildly optimistic.

In some parts of the heartland, it literally looks like a hurricane just came through. When Ohio Department of Agriculture Director Dorothy Pelanda recently toured farms in her state, she saw fields that were “filled with water and weeds instead of crops”…

“I visited with several farmers this week and saw firsthand the impact of this devastating rainfall. Fields are visibly filled with water and weeds instead of crops,” states Ohio Department of Agriculture Director Dorothy Pelanda in the press release.

And for Ohio farmer Charles Kettering, hundreds of acres that he recently planted with corn and soybeans can’t be seen at all because they are currently underwater…

As much as a third of the 800 acres of corn and soybeans that Kettering planted a few weeks ago is currently underwater. The chances of that part of his crop surviving are next to nothing. As little as a full day underwater is enough to kill off whatever he planted. The deluge of heavy rain in late May and early June flooded much of the area’s fertile farmland, including Kettering’s acreage, which sits in the bottom of a valley.

As a result of the flooding here in June, the Ketterings will lose approximately $100,000.

Could you imagine how you would feel if you were suddenly hit with a financial loss of that magnitude?

Other farmers will be hit with huge losses at the end of the season when yields are way down. Thanks to the absolutely horrific weather, it is being projected that yields could be down by more than 50 percent for some Ohio farmers…

For those planting corn in June, yield losses are likely—even if the grower has switched to a shorter-season variety, said Peter Thomison, a corn field specialist with CFAES. The losses hinge on growing conditions after planting, but they could be more than 50% for some farmers, he said.

In the end, there is no way that we are going to come anywhere close to the 14.3 billion bushels of corn that was harvested in the U.S. last year, and that is going to have ripple effects that are going to last for a very long time.

For many Midwest farmers, this will be their last year in operation. Farm bankruptcies had already risen to the highest level since the last recession even before all of this rain, and this unprecedented disaster will be the final nail in the coffin for a lot of farms that have been teetering on the brink.

According to one recent survey, it is expected that the number of farm loan defaults over the next year will be double what we saw in 2017…

Midwestern bankers are tightening the purse strings on farm credit lines amid some of the toughest financial times for farmers in decades.

A survey of bank CEOs by Creighton University’s Heider College of Business found they expect the percentage of farm loan defaults over the next 12 months in a number of Midwestern states, including Illinois, to be double the default rates for 2017.

I keep warning that our planet is becoming increasingly unstable and that global weather patterns are changing dramatically. Midwest farmers are desperately hoping for some drier weather, but instead a lot more rain is coming…

Rain is in the forecast every day this week until Friday, and then we have a break over the weekend with more rain coming in Tuesday, Wednesday, Thursday of next week.

The true scope of this crisis will not be fully known until harvest time rolls around, but right now the outlook for U.S. agricultural production in 2019 is exceedingly grim.

Perhaps things will soon dry out and we will have picture perfect weather for the rest of the growing season. If that happens, it will definitely help matters greatly.

But there is also the possibility that Midwest farmers could be hammered by extreme rain, extreme heat and/or an early frost.

Sadly, at this point it certainly wouldn’t take very much to turn an exceedingly bad growing season into a catastrophic one.