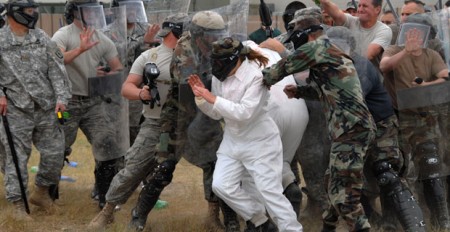 The U.S. Army is preparing to fight political dissidents who challenge the power of the state as “megacities” become the battleground of the future, according to a new report in the Army Times.

The article details how the Army’s Capabilities Integration Center (ARCIC) worked with US Army Special Operations Command, the chief of staff’s Strategic Studies Group and the UK’s Ministry of Defence earlier this year to wargame the future of armed combat, which will revolve around the neutralization of groups “who can influence the lives of the population while undermining the authority of the state,” a chillingly vague description which could easily be applied to political dissidents.

The plan foresees an unprecedented realignment of U.S. military strategy focused around putting “boots on the ground” in megacities to deal with “politically dispossessed” populations while relying on “more lethal and more autonomous” methods.

“It is inevitable that at some point the United States Army will be asked to operate in a megacity and currently the Army is ill-prepared to do so,” asserted a report by Army Chief of Staff Gen. Ray Odierno’s Strategic Studies Group, while Lt. Gen. H.R. McMaster warned that the Army will increasingly have to expand its presence to battle an enemy which operates in “other contested spaces like organized crime and politics.”