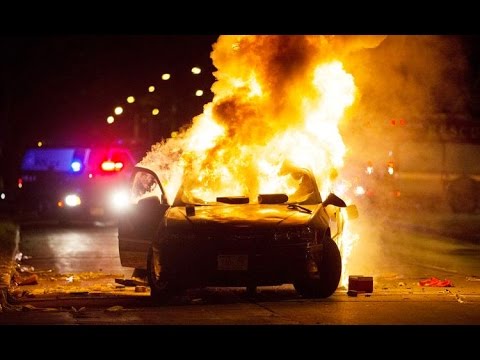 The city of Milwaukee, Wisconsin exploded in violence last night as the wave of chaos and civil unrest that is sweeping across America continues to intensify. At this point, many of our largest cities have become powder kegs of anger and frustration, and a full-blown riot can be set off with a single bullet. In this case, an armed suspect was shot and killed by Milwaukee police as he attempted to evade the police, and his death almost instantly set off pandemonium in the heart of the city. America is being ripped apart, and much more violence is coming. Decades of social decay and economic decline have fundamentally transformed many of our greatest cities, and tensions that have been simmering for a very long time are now being brought to a boil. Sadly, it seems quite likely that we will see even more rage, hatred and divisiveness in the months ahead.

The sudden eruption of violence that we witnessed in Milwaukee last night was absolutely stunning. Within just hours after the shooting of the armed suspect, fires were burning all over the city…

Protesters clashed with officers in the hours after a Milwaukee police officer shot and killed an armed suspect during a foot chase. After an hours-long confrontation with officers, police reported that a gas station was set on fire. Police said firefighters initially could not get close to the blaze because of gunshots.

Later, fires were started at a bank branch, a beauty supply company and an auto parts store as scores of people gathered near the crime scene on the city’s north side, a grim Mayor Tom Barrett said at a news conference Saturday night. He said the unrest was driven by a social media frenzy urging people to gather in the area.

Of course police were one of the primary targets of the violence. It is being reported that at least one squad car was set ablaze, and another had a brick thrown through a window.

One prominent Milwaukee city official is blaming racial injustice for the violence. The following comes from CNN…

City Alderman Khalif Rainey said the area has been a “powder keg” for potential violence throughout the summer.

“What happened tonight may not have been right and I am not justifying that but no one can deny the fact that there are problems, racial problems in Milwaukee, Wisconsin, that need to be rectified,” Rainey said. “This community of Milwaukee, Wisconsin, has become the worst place to live for African Americans in the entire country.”

Rainey said Saturday’s violence was a byproduct of inequities, injustice, unemployment and under-education.

“Something has to be done to address these issues,” he said. “The black people of Milwaukee are tired, they are tired of living under this oppression, this is their life.”

Without a doubt, the suffering that is going on in our inner cities is intense. Our economic infrastructure has been gutted by decades of bad trade deals, and evidence of severe social and moral decay is all around us.

But no matter how bad things are, there is never any excuse for committing random acts of violence. In addition to setting businesses on fire, it is being reported that rioters were trying to drag people out of their vehicles in order to beat them up.

How in the world does that solve anything?

Meanwhile, police all over the nation continue to be targets of violence. In a previous article, I told my readers that the number of police officers that have been shot and killed this year has risen by 78 percent compared to last year.

Well, over the past few days some more officers have been added to the list. For example, the following is an excerpt from a CNN report about an officer that was just shot and killed in south Georgia…

A police officer was shot dead while responding to a call of a suspicious person in south Georgia, authorities said.

The shooting occurred Saturday night after the officer, Tim Smith, got the call in a residential area in Eastman, special agent Scott Whitley of the Georgia Bureau of Investigations said.

While on patrol, Smith encountered the subject and exited his car. That’s when he was fatally shot, Whitley said.

Two Ohio fugitives wanted for a murder have been arrested after authorities say one of them fatally shot a New Mexico police officer.

In addition, there was another very disturbing incident that just happened a few days ago in Arkansas. When a suspect started shooting at police officers, one was killed, one was wounded, and a police dog named Kina that got hit and ran away was just found on Saturday…

Police spokeswoman Kristin Faulkenberry told reporters the dog, named Kina, “was up and walking” when searchers found the animal Friday morning near where the shooting unfolded near Hackett, about 115 miles west of Little Rock.

Earlier today I talked to a friend of mine that works as a police officer, and he admitted that he and his wife do think about all of this violence that is being directed at the police. I suppose that it would be exceedingly difficult not to. Those that are serving their communities in this way are going to have a very tough time moving forward. At this point every single law enforcement officer in the entire nation is a potential target, and they are just going to have to find a way to deal with this new reality.

America is more divided than I have ever seen in my entire lifetime. Instead of learning how to love one another, hatred is growing by the day.

More chaos is coming, more violence is coming, and more of our cities will burn.

Things didn’t have to turn out this way, but thanks to decades of incredibly foolish decisions we will now reap what we have sown.