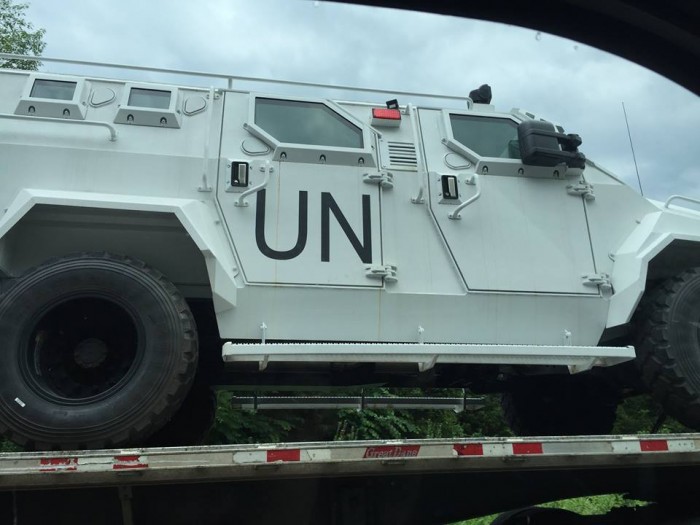 You may not be getting prepared for a major national disaster, but the government sure is. I have been informed that in recent months numerous emergency food companies have been contacted by the government, and they have been told that their inventories could potentially be seized in the event of a significant emergency. And as you will see below, the government recently participated in an exercise that simulated “an unprecedented global food crisis lasting as long as a decade”. In addition, NPR has just revealed details about the very secretive Strategic National Stockpile program that is storing billions of dollars worth of medical supplies in warehouses around the nation. This is a program that most Americans do not even know exists. On top of everything else, strange reports of military vehicles with UN markings have been coming in from all over the nation. So what in the world is the government up to? Why are they working so feverishly hard to get prepared?

Let’s begin our discussion with the Strategic National Stockpile. According to NPR, there are at least six of these warehouses at various locations around the country, and they are holding at least seven billion dollars worth of supplies…

Thousands of lives might someday depend on this stockpile, which holds all kinds of medical supplies that the officials would need in the wake of a terrorist attack with a chemical, biological or nuclear weapon.

The location of these warehouses is secret. How many there are is secret. (Although a former government official recently said at a public meeting that there are six.) And exactly what’s in them is secret.

“If everybody knows exactly what we have, then you know exactly what you can do to us that we can’t fix,” says Burel. “And we just don’t want that to happen.”

What he will reveal is how much the stockpile is worth: “We currently value the inventory at a little over $7 billion.“

The NPR report indicates that most of the supplies are medical in nature, and this includes “millions of doses of vaccines“.

Could it be possible that the government is anticipating a major pandemic in our near future?

As I mentioned above, the government has also been preparing for a major food crisis. The following comes from Vice…

The US national security industry is planning for the impact of an unprecedented global food crisis lasting as long as a decade, according to reports by a government contractor.

The studies published by CNA Corporation in December 2015, unreported until now, describe a detailed simulation of a protracted global food crisis from 2020 to 2030.

The simulation, titled ‘Food Chain Reaction’, was a desktop gaming exercise involving the participation of 65 officials from the US, Europe, Africa, India, Brazil, and key multilateral and intergovernmental institutions.

So could we actually see such a major food crisis during the years ahead?

Well, according to Reuters global demand for food has already been surging, and one new report indicates that it won’t be too long before we could see “a doubling of food prices”…

Swelling populations and demand for food combined with ever scarcer water and land resources could lead to a doubling of food prices and trigger civil unrest in some developing countries, a new report says.

Demand for food with a higher environmental impact, such as meat, has surged as emerging countries like China and India grow in size and in wealth, said Martin Halle, policy analyst at Global Footprint Network (GFN).

“A few things are very clear: the demand for food is going up tremendously because of population growth,” he told the Thomson Reuters Foundation.

Of course it is the job of the government to prepare for various apocalyptic scenarios. If government officials weren’t planning for how our nation would make it through a major disaster, they wouldn’t be doing their jobs.

But what are we to make of all of the strange sightings of UN vehicles all over America recently?

According to my friend Ray Gano, UN military vehicle activity has recently been reported “in Texas, Mississippi, Arizona, Florida and now in Virginia“.

In particular, a series of photos of white UN military vehicles traveling through Virginia that were posted on Facebook by Jeff Stern has popped up in news stories worldwide.

Is all of this activity unusual? If so, should we be alarmed by it? Brandon Turbeville apparently thinks so…

For the past day or so, military convoys have been witnessed traveling both North and South, with lines of equipment ranging from Humvees, troop transport trucks, and tankers to military personnel following the convoy in civilian vehicles. Interestingly enough, many of the soldiers traveling in the convoy were seen wearing helmets, an unusual procedure for a simple convoy. In addition, the convoys were carrying what appeared to be construction equipment.

Although the troop movement may indeed have been a routine convoy and the United Nations vehicles may also have been a routine shipment from a manufacturing facility or even a simple and benign transport, the controversy brewing in the United States elections and the potential for civil unrest, the dangers of economic collapse, and the potential conflict with Russia are all potentials for use of United Nations “peace keepers” inside the United States as many have posited in the past as well as for some type of “martial law” scenario.

The armored UN vehicles that were spotted being transported through Virginia are quite impressive. Here is some info on them from the Daily Mail…

Seating for two plus eight crew.

Windows do not roll down, instead there are locked gun ports on the vehicle that can be opened to shoot bullets out or accept documents in and are even big enough to pass through a can of soda.

In addition, these heavily armored vehicles are designed to withstand a gas attack and to be impervious to small arms fire…

Internal fans can keep bad air out, such as in the event of a gas attack, or bring fresh air in when reversed.

PA system to speak to the outside world.

Remote-controlled spotlights on the roof and pairs of red and blue strobe lights are mounted to each four sides of the vehicle.

Every window on the vehicle is filled with ballistic glass that’ll shed small arms fire like they’re pebbles and even resist a close-range shot from a high-powered rifle.

Each vehicle has nine gun ports, and so when they are fully manned they can lay down a very impressive field of fire.

At the end of the day, I don’t know what all of this means.

Everything that I just detailed could just be part of normal government activity that is simply receiving some unusual attention right now.

Or of course it could also be possible that the government is getting prepared for something really big, but even if they were, they would not tell us in advance anyway.

Personally, I am convinced that this period of time leading up to the election will be highly chaotic in America, and so my eyebrows definitely perked up when I came across these various news stories.

But ultimately the significance of all of this will be determined by what happens during the weeks and months to come. Without a doubt things have become much more serious in this nation lately, and I have a feeling that they are about to get a whole lot more serious…