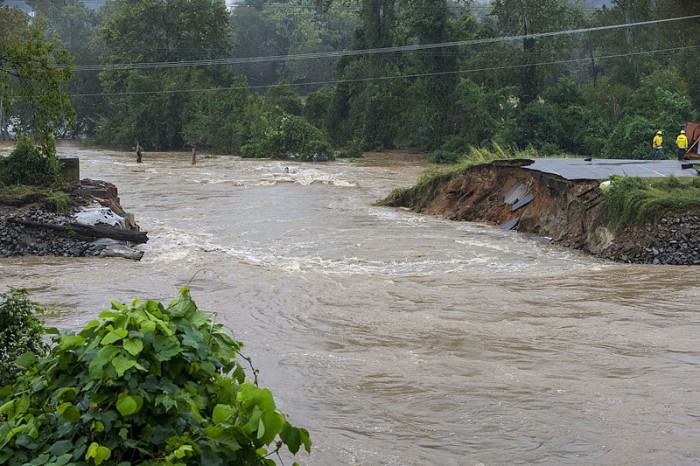 Over the past 30 days, major floods have hit the east coast, the west coast and now the middle part of the country. So why is this happening? Why is the U.S. being hit by so many catastrophic weather events all of a sudden? During the past month flooding has caused billions of dollars in damage, and in many areas the clean up is going to take well into next year. Some pundits are blaming El Nino, but others are pointing to other potential reasons for why this may be happening. Let’s start by taking a look at some of the biggest flood events that have happened over the past 30 days…

Hurricane Joaquin never made landfall on the east coast, but moisture from the storm had a tremendous impact – particularly in South Carolina. In fact, the governor of the state said that the region had not seen that type of rain “in a thousand years”…

“We haven’t had this level of rain in the low-country in a thousand years — that’s how big this is,” said South Carolina Gov. Nikki Haley. Days of record rainfall and catastrophic flooding left at least seventeen people dead in South Carolina and two dead in North Carolina, Oct. 6, 2015. Thirteen dams have failed.

It would be very difficult to overstate the amount of damage that was caused by this storm. Some officials are estimating that the total amount of economic damage done “will probably be in the billions of dollars”…

The rains may have stopped in South Carolina, but the danger and the work to rebuild are far from over.

“I believe that things will get worse before they get better,” Columbia Mayor Steve Benjamin told reporters Monday.

“Eventually the floods will abate, but then we have to access the damage, and I anticipate that damage will probably be in the billions of dollars, and we’re going to have to work to rebuild. Some peoples’ lives as they know them will never be the same,” he said.

Of course this is far from the only destructive flooding event that we have seen in recent weeks.

Out in California they have been getting hit with disaster after disaster. First, the wildfire season came very close to setting a national record this year, and it was particularly bad out west. The following comes from USA Today…

The amount of land burned by wildfires in the U.S. this year has surpassed 9 million acres, according to data released Thursday by the National Interagency Fire Center.

This is only the fourth time on record the country has reached the 9 million-acre mark, center spokesman Randall Eardley said in an e-mail. The area burned is roughly equivalent to the size of New Jersey and Connecticut combined.

I have a feeling that when the final numbers are all in and tallied that 2015 will end up setting an all-time record for wildfires.

But after a really dry, hot summer, southern California got surprised by a deluge of heavy rain this month and the results were absolutely catastrophic. The following comes from Fox News…

A flood of mud and debris triggered by heavy rainfall in Southern California rushed onto streets and highways Thursday, stranding hundreds in their cars and closing a major interstate.

Nearly 40 miles of Interstate 5 north in Los Angeles were still closed Friday afternoon after heavy rainfall sent mud, debris and even boulders streaming into the north-south running freeway, according to the California Department of Transportation.

Some people, stuck in up to 5 feet of mud, were forced to camp overnight in their vehicles, according to NBC Los Angeles. Pictures on social media showed some cars submerged in debris up to the windshields.

Authorities are still digging people out from this mess several days later. In fact, the dead body of one man was just pulled out of a van that had been encased in several feet of mud…

Southern California fire crews discovered a man’s body Tuesday inside a van that had been buried under several feet of mud after a flash flood overran a road near Los Angeles last week.

And just over this past weekend, the middle part of the country has had to deal with tremendous flooding as well. Hurricane Patricia turned out to be the world’s strongest hurricane since at least 1970, and the remnants of this storm are hitting the state of Texas quite hard.

The small town of Powell, Texas got 20 inches of rain in just 30 hours, and a Union Pacific train that was running nearby was derailed by the heavy flood waters…

A Union Pacific freight train carrying cement derailed in Navarro County after a creek overflowed, washing out the tracks. Locomotives and rail cars were pushed on their sides, and a two-person crew was forced to swim to safety.

Repair teams cleared the derailed cars by Sunday morning, but they were not expected to be righted for several hours and a locomotive was not seen being moved until later in the day, Union Pacific spokesman Jeff DeGraff said on Sunday afternoon.

All of this has happened within the past 30 days.

So is there a reason why all of these events have happened?

Of course some people say that it is just a coincidence that all of these storms have hit us in such close proximity.

Others are pointing to the extremely strong El Nino that has developed. Here is an excerpt from a recent Bloomberg report…

It has choked Singapore with smoke, triggered Pacific typhoons and left Vietnamese coffee growers staring nervously at dwindling reservoirs. In Africa, cocoa farmers are blaming it for bad harvests, and in the Americas, it has Argentines bracing for lower milk production and Californians believing that rain will finally, mercifully fall.

El Nino is back and in a big way.

Its effects are just beginning in much of the world — for the most part, it hasn’t really reached North America — and yet it’s already shaping up potentially as one of the three strongest El Nino patterns since record-keeping began in 1950. It will dominate weather’s many twists and turns through the end of this year and well into next. And it’s causing gyrations in everything from the price of Colombian coffee to the fate of cold-water fish.

That certainly doesn’t sound promising for the months ahead.

But some climate “experts” are really playing down the impact of El Nino. Instead, they are attempting to convince us that what we are witnessing is simply the result of “man-made climate change”, and they are using this as an opportunity to promote their agenda.

And there are yet others that see a spiritual dimension to all of this. In fact, there are some out there that believe that all of this flooding could be a sign that the judgment of God on America has begun.

Do you believe that there is a reason why the U.S. is experiencing so much flooding lately?