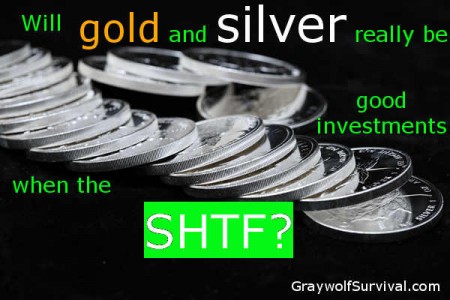 Is silver really a good investment for barter?

Should you invest in silver or gold for a safety net in case the economy gets worse? I’m going to go over the pluses and minuses of each and tell you what I think.

Some of you who’ve now been reading Graywolf Survival for a while may remember a quick article I wrote a while back on breakable gold bars which was interesting, but not really practical for most people. I’ve been meaning to come back to the general idea of barter and commodities after SHTF for a while but frankly, I just got sidetracked with finding a job after returning from Afghanistan and spending some time in the Bahamas. I really should sit down someday and come up with a plan of posts to write but whatever.

I’ve seen a lot of stuff out there on buying silver and gold due to the economy tanking and whatnot. A lot of that stuff is pure crap just to get you to buy silver and gold from whatever link you happen to be linking on so they can get their commission. I do believe that it would benefit you to do some research and consider buying precious metals but make sure you diversify your investments into other things – like learning.

I see this all the time when someone brings up the idea of buying something like silver or gold to be used for barter if SHTF. Someone (a lot of someones, actually) always pipes up with some crap like “you can’t eat silver.”

Thanks Captain Obvious. You also can’t eat bullets. And you can’t wear food. But you know what you can buy food, bullets, and clothing with? Silver and gold. Also, you don’t know what’s going to happen if society collapses, so stop pretending like you do.

Prepping is all about investment – that’s the whole point. You invest time, money, space, and energy into things in advance of some upcoming emergency or disaster situation. As I’ve mentioned in previous posts, due to opportunity cost (I haven’t read the book in that link but it’s hella expensive so it must have a bunch of good stuff about opportunity cost in it – $94 kindle FTW!), when you make one decision, it’s at the expense of all others. The problem is that with prepping, you don’t really know what you should be investing your time and money on because you don’t really know what crap is gonna come. All you can do is learn what you can, make an informed decision, act, rinse, repeat.

trading has always been a large part of commodity trading ever since ancient man realized that ancient women would sleep with them if they brought them shiny stuff that other ancient women didn’t have. From that, it became so popular that gold became the standard of bartering.

Precious metals have ALWAYS had value as an intermediate commodity in every social collapse in the history of mankind. You can’t directly trade with everyone because you might have alcohol but they don’t need alcohol. They might have tools to trade, but you don’t need tools. By having a commonly-accepted commodity, you can trade with each other, knowing that you’ll be able to still trade your goods later.Also, if what you’re trading has an expiration date (like food), you can’t always wait for someone to come along with something that you need to barter with them. By using an intermediate commodity like silver or gold, you can take the trade now and use the commodity later. Otherwise you end up throwing out a bunch of good food or trading it at a severe loss.If you think that society will completely collapse and there will forever more never be a society, they anything without intrinsic value would be useless. History has shown us for thousands of years, time and time again, that this isn’t the case.

Don’t just take my word for it, read The Silver Bomb: The End Of Paper Wealth Is Upon Us, which goes through the history of currency and explains why the authors believe that the world will soon return to gold and silver as money.

Is gold a better investment than silver?

, which explains how and why you should be investing in gold and silver, would be a much better place to read something like that.

The problem with gold, is that it’s expensive. Real expensive, as you can see from the Breakable Gold Bars article I mentioned. That’s great if you’re storing it in a bank vault. Not so great if you’re carrying it around for daily use. It’s a bit difficult to shave off a tiny amount to buy a loaf of bread. Kinda like walking into a dollar store with $1,000 bills. Unless you’re buying a large item or they’re willing to make change somehow, you may have no choice but to overpay.

Silver, however is a bit easier to carry. At current prices, gold is about $1,200 per ounce and silver is $20 as of the time of this article. For all you math-deprived individuals, that means that a chunk gold to buy something will weigh about 1/60th of the same amount of silver. Sounds good on the surface but if you were looking to buy something like a chicken, assuming they’re about $5 for argument’s sake, you’d have to buy 280 of them for an ounce of gold or just 4 or 5 for an ounce of silver. In other words, a chicken is 1/240th of an ounce of gold and 1/4 of an ounce of silver. A pocketful of gold my ass.

Enough of that. Now my head hurts from math and I’m hungry. Time for another drink.

So why are we talking about all this anyway? If you’ve decided to invest in precious metals, buying silver may actually be a smarter choice than gold for practicality. If so, you can head to a local jewelry or pawn shop and get some or a website like CBMint.com or Buysilvercoins.com. If you’d like to go entirely the other direction, platinum or some other pseudo-unobtanium may be what you’re looking for to hold as much value in as little space as possible but it’s probably not the best choice for preppers.

Should you invest in silver or gold?

Now, the big question is: should you be buying silver or even buying gold in case SHTF? In short: yes. Kind of. Remember, investing in skills is much better in the long run. Some think that bullets, alcohol, or tobacco may be the way to go. Remember though that the reason gold and silver are ALWAYS popular when things go to crap is because pretty much EVERYONE accepts them as a form of payment because it’s always been that way. You can’t sell bullets to someone without a gun or alcohol to someone who doesn’t drink – unless they’re just using it in hopes that they’ll run across someone who does.

As I keep trying to get across, you need balance in your life. If you’re only worried about the end of society then gold and silver may be a good bet. The reality of the situation is that every dollar you invest in gold and silver (bullion, coins, jewels, whatever), is a dollar you can’t invest in something else like land, food, water, school, etc.

What happens if TEOTWAWKI doesn’t come for 32 years? Or 320? Gold and silver do fairly well in most economic conditions, especially when they’re crap, but don’t do as well in other times compared to other investments. For all you know, even if you’re concerned about some impending end of your way of life, TEOTWAWKI could come in 32 years and you could be hit by a bus in 31. One thing I’ve seen though is that eventually, precious metals always go up.

If you’re going to invest, you have to consider not only SHTF but all the time before that. By investing wisely, you’ll have not only a better life for the next XXX years, you’ll be better off if SHTF. Just don’t forget that if society does collapse, all the money in your portfolios and in your digital bank accounts will instantly become worthless. Just like if Justin Bieber becomes king of the US and declares all gold worthless, whatever investment in those assets may not pan out. This goes the same for land, learning, food – whatever. An investment only pays off when you sell it. Unless it’s a Harley. Then it pays off every time you ride it. Or a girl sees you ride it.

So what does all this rambling boil down to? In my limited perception of what is and what will be, my personal thoughts are that you should be investing in gold and silver, as both a SHTF solution and as investments in themselves. You should also be investing smartly in other investments such as stocks and bonds in the chance (the most likely chance) that shit isn’t gonna hit the fan in the next decade or so that would collapse society to the point that we’d be back to a full barter system.

I also believe that in a TEOTWAWKI scenario, silver is probably a better choice than gold due to its utility but may or may not perform as well in the meantime.

Basically, invest with all of your future in mind – not just the end of the world. Also, diversify your positions in whatever you’re investing because you don’t know what’s going to happen with the market. Then keep in mind the non-trade utility (such as storage, protection, etc) of whatever your investments are in several different SHTF and non-SHTF scenarios.

Before you go out and pay top dollar for gold or silver, check out places like this link for deals that occasionally come up

. You can not only save money, you can get some pretty creative ways to buy it.

But what percentage of your disposable income should you be putting in gold/ siver/ land/ school/ learning/ ammo/ alcohol/ medicine/ widgets? That’s a good question. You’ll have to read something like The Intelligent Investor

to find the answers on that one.

Just make sure you don’t put all your eggs in one basket – even if they are gold.