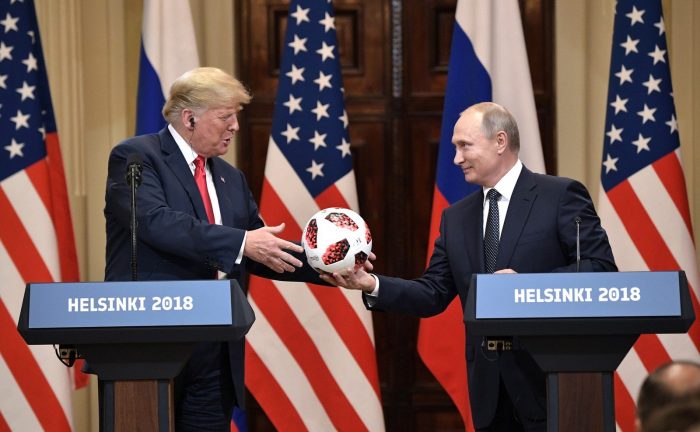 Donald Trump’s summit meeting with Vladimir Putin in Helsinki has unleashed a torrent of criticism that is unlike anything that we have ever seen.  U.S. and Russian leaders have been getting together for decades, but this particular gathering was labeled the #TreasonSummit on social media before it even began.  In the end, nothing that Trump could have possibly done would have pleased his critics, and the joint press conference at the end of the summit was enough to push some of them completely over the edge.  Here are 10 attack quotes from establishment insiders about the Trump-Putin summit that will make your skin crawl…

#1 CNN’s Anderson Cooper: “You have been watching perhaps one of the most disgraceful performances by an American president at a summit in front of a Russian leader certainly that I’ve ever seen.”

#2 U.S. Representative Steve Cohen: “Where are our military folks? The Commander in Chief is in the hands of our enemy!”

#3 Former CIA Director John Brennan: “Donald Trump’s press conference performance in Helsinki rises to & exceeds the threshold of ‘high crimes & misdemeanors.’ It was nothing short of treasonous. Not only were Trump’s comments imbecilic, he is wholly in the pocket of Putin. Republican Patriots: Where are you???”

#4 Senate Democratic Leader Chuck Schumer: “Millions of Americans will continue to wonder if the only possible explanation for this dangerous behavior is the possibility that President Putin holds damaging information over President Trump.”

#5 Senator Jeff Flake: “I never thought I would see the day when our American President would stand on the stage with the Russian President and place blame on the United States for Russian aggression. This is shameful.”

#6 Fox News Host Abby Huntsman: “No negotiation is worth throwing your own people and country under the bus.”

#7 Fox Business Anchor Trish Regan: “Horrible performance from our President today. pretty ugly when u give a pass to a nation that is undermining our democracy.”

#9 U.S. Representative Liz Cheney: “As a member of the House Armed Services Committee, I am deeply troubled by President Trump’s defense of Putin against the intelligence agencies of the U.S. & his suggestion of moral equivalence between the U.S. and Russia. Russia poses a grave threat to our national security.”

#10 Senator John McCain: “Today’s press conference in Helsinki was one of the most disgraceful performances by an American president in memory. The damage inflicted by President Trump’s naiveté, egotism, false equivalence, and sympathy for autocrats is difficult to calculate. But it is clear that the summit in Helsinki was a tragic mistake.”

Can you remember a time in the modern history of our country when the mainstream media and members of Congress talked about a president in such a manner?

The mainstream media in particular is supposed to maintain some semblance of objectivity, but they hate Donald Trump so much that they can’t resist saying these things.

At this point they hate Donald Trump so much that they would be quite happy to sabotage peace talks between the United States and Russia just to damage him.  This is something that Caitlin Johnstone commented on in her most recent article…

Opposing talks which could lead to de-escalations between the two countries who own almost all of the nuclear warheads in the world is inexcusable and unforgivable. I don’t care if you’re dumb enough to swallow the US intelligence community’s still completely unsubstantiated claims of Russian hacking. I don’t care if you think Trump is bought and owned by Vladimir Putin. Even if both of those things were true, there would still be no excuse for opposing peace talks in a dangerously escalating new cold war. None.

Communication and understanding in this situation is an objectively good thing. This meeting with Russia’s leader, which all US presidents have done for many decades, is an objectively good thing. If you have joined in the campaign to help shove the tide of opinion away from peace and toward nuclear holocaust, you are making yourself an enemy of humanity. You have become so warped and demented by your hatred of Donald Trump that it has made a part of you less human.

Of course there are some members of the establishment that actually want a new Cold War.  I can’t imagine that too many of them actually want nuclear missiles to start flying back and forth, but a heightened state of animosity between the United States and Russia serves the purposes of the Deep State quite well.

In order to justify its existence, the Deep State needs a “boogeyman”, and these days Russia is that boogeyman.  Donald Trump’s election victory is being blamed on Russia, which is complete nonsense, and Vladimir Putin put a very interesting spin on things when he dropped a “MOAB” about Bill Browder and Hillary Clinton’s campaign during the joint press conference…

For instance, we can bring up Mr. Browder, in this particular case. Business associates of Mr. Browder have earned over $1.5 billion in Russia and never paid any taxes neither in Russia or the United States and yet the money escaped the country. They were transferred to the United States. They sent [a] huge amount of money, $400,000,000, as a contribution to the campaign of Hillary Clinton. Well that’s their personal case. It might have been legal, the contribution itself but the way the money was earned was illegal. So we have solid reason to believe that some [US] intelligence offers accompanied and guided these transactions. So we have an interest in questioning them.

Browder is an American-born British financier. He is the CEO and co-founder of Hermitage Capital Management, an investment fund that at one time was the largest foreign portfolio investor in Russia.

Bill Browder’s grandfather was head of the Communist Party USA.

The Russian government put Browder on the Interpol most wanted list in 2017.

If anything that Putin is alleging is even partially true, especially the part about U.S. intelligence being involved, then we have a scandal on our hands that absolutely dwarfs anything that the left ever imagined that Trump could have possibly done.

A small amount of social media manipulation is absolutely nothing compared to four hundred million dollars.  If Putin has evidence that U.S. intelligence agents played a role in funneling that kind of money into Hillary Clinton’s campaign, he needs to show it to all of us immediately, because the American people deserve to know the truth.