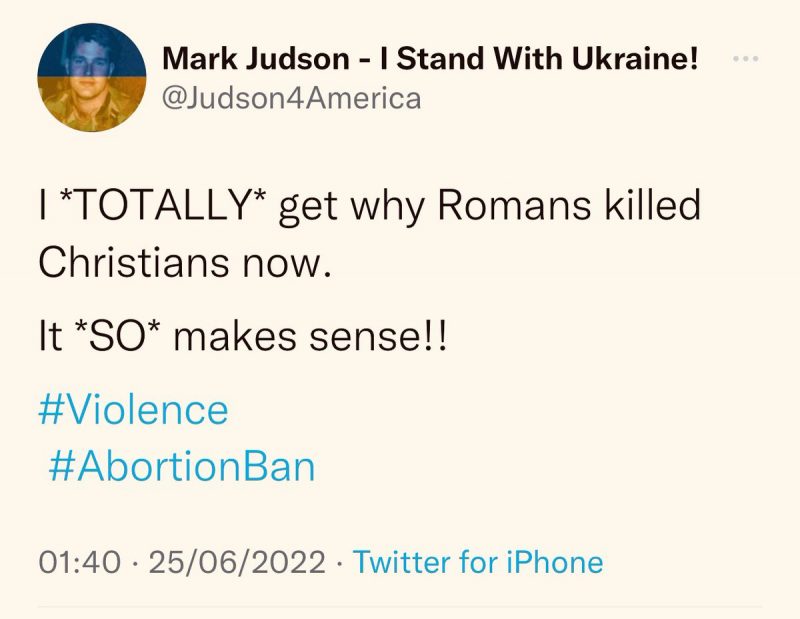 Many people believed that the Supreme Court would never overturn Roe. v. Wade, but now it has happened.  It is one of the biggest political developments of our generation, and this Supreme Court decision has unleashed a flood of emotion all over the country.  Some of the video clips that I am going to share with you in this article are very raw.  So be warned in advance that you are going to see some disturbing images and you are going to hear some foul language.  In other instances, there are some that have attempted to find humor in what is taking place.  But of course there is nothing funny about abortion.  More than 60 million children have been killed in the United States since Roe v. Wade was decided in 1973, and millions more will be killed in the years ahead.  And even though the abortion industry will be able to continue to conduct business as usual in most of the country, liberals are throwing a monstrous temper tantrum now that Roe has been overturned.  In this article, I am going to try to show you what is really going on out there.  I am going to show you the good, the bad and the ugly and it will not be filtered.  The following are 11 of the most notable reactions to the Supreme Court decision to overturn Roe…

#1 When the Supreme Court decision was officially announced, some pro-abortion protesters instantly burst into tears…

TRIGGERED: Pro Abortion protesters burst into tears and begin to condemn the Supreme Court as “ILLEGITIMATE” as the decsion to overturn Roe v Wade is announced in front of the Supreme Court here in DC | @TPUSA pic.twitter.com/Qgl8JSzjup

#2 Other liberals responded to the decision by going into fits of rage.  Here is one woman that decided that recording herself screaming was the best way to deal with what happened…

#3 Maxine Waters is up to her old tricks.  She made national headlines when she publicly promised to openly defy the Supreme Court…

BREAKING: Rep. Maxine Waters says “to hell with the Supreme Court, we will defy them!”pic.twitter.com/XMYvgbpEHR

#4 Many on social media have been suggesting that a national sex strike is the best way for women to use their leverage.  Here is one example…

“In protest of the overturning of Roe V Wade every unmarried woman should go on a sex strike, stand up for what you believe in.”

So to protest this Supreme Court decision, this individual is suggesting that promiscuous young liberal women should say no to sex until they get married?

I think that most conservative Christians would actually be thrilled to see that happen.

#5 To protest the overturning of Roe, one particularly crazed woman has decided to put her blood into an envelope and mail it to the Supreme Court…

This woman mailed her period blood to the Supreme Court to protest the overturning of #RoeVWade pic.twitter.com/Km9z3YnDt6

#6 During a panel discussion about abortion on CNN, Ana Navarro used members of her own family that have “special needs” as examples for why abortion is necessary…

Yikes — @ananavarro is talking about her “special needs” family members with Autism and Down’s Syndrome to make the case for Abortion.

These people are SICK. pic.twitter.com/BSLprNd9ba

#7 As I detailed in a previous article, radical leftists in Arizona actually attempted to engage in a very real act of insurrection in Phoenix.  Kari Lake was absolutely horrified by this…

The left is showing everyone what a REAL “Insurrection” looks like right now in Downtown Phoenix.

This is domestic terrorism. The Arizona national guard should have been deployed hours ago, @DougDucey

Arrest these animals immediately. They are out for blood. pic.twitter.com/RI8uNrioVz

#8 Following the announcement of the decision to overturn Roe, there were some on Twitter that were openly calling for violence against Supreme Court justices.  In fact, one individual clearly stated that he intended to assassinate Clarence Thomas, and it took quite a long time before that post was finally removed…

While Twitter routinely bans conservatives, those who challenge the government-sanctioned Covid-19 narrative, or the results of the 2020 US election, threatening to assassinate a Supreme Court justice is just fine.

They really do want you dead. pic.twitter.com/hmOD5fdsw0

#10 We are seeing such an outpouring of hatred toward Christians right now.  People are showing us what they truly think in their hearts, and it is absolutely frightening…

They literally want you dead pic.twitter.com/7MVvlqFNMT

#11 Of all the sick things that I have come across in recent days, what Stacey Abrams told Fox News was one of the sickest.  When asked if she would support any restrictions on abortion, she insisted that abortion should be legal all the way up to the point of birth…

Of course it isn’t just Stacey Abrams that feels this way.

We have countless other politicians that hold the exact same position.

And what is truly sad is that the vast majority of the U.S. population fully embraces abortion.  Just check out these brand new poll numbers…

Americans disapprove of the decision by 59%–41%. Fully two-thirds of women oppose the ruling with only 33% agreeing with it.

A majority of Americans — 52% — believe that overturning Roe is “a step backward for America” while 31% think it’s “a step forward.”

How could we have fallen so far?

If we stay on the road that we are currently on, there is no future for our country.

Even though Roe has been overturned, well over 80 percent of the abortions that were performed before will still be able to happen.

For most of the remaining cases, those that want abortions will just have to drive to a neighboring state.

So ultimately not that much has actually changed.

But that won’t stop liberals from throwing massive hissy fits.  Here is a compilation of some of those meltdowns that comes from Freedom Toons…

And here is a compilation that was put together by Paul Joseph Watson… Abortion has once again become the hottest political topic in America, and now we are going to have a national debate about this issue that will be unlike anything we have ever seen before.

Emotions are very high, and our nation is becoming more deeply divided with each passing day.

Meanwhile, the U.S. continues to kill babies on an industrial scale, and that is not going to change any time soon.