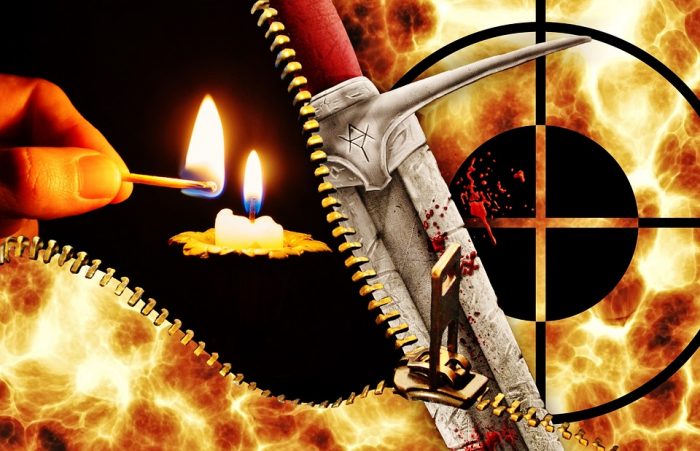 The left just can’t seem to understand that Islamic terrorists are going to try to destroy our way of life no matter how nice we are to them.  On Monday night, a bombing at Ariana Grande’s Manchester concert made headlines all over the globe.  22 people, including an 8-year-old girl, were killed and 59 were wounded.  It is exactly the sort of “soft target” attack that I have been warning about, and ISIS quickly claimed responsibility.  Within the last 30 days, there have been 169 Islamic terror attacks in a total of 24 different countries.  Last year, the number of global terror attacks was up 25 percent from the year before, and this year we will almost certainly see another all-time record high.  But many liberals never even want to use the phrase “Islamic terror” because it doesn’t fit their agenda.

In fact, many liberals immediately jumped on Twitter after the terror attack in Manchester and started warning about the spread of “Islamophobia”.

Don’t use #Manchester incident as an excuse for Islamophobia. Stand with our beautiful Muslim siblings & don’t scapegoat innocent people.

I have a good idea. Let’s piss off more Muslims with mindless Islamophobia. That should help.

Of course the mainstream media here in the United States attempted to put their own politically-correct spin on things.  On ABC, there was far more concern about “anti-Islamic backlash” than there was for the victims of the attack…

Despite the horrific nature and impact, ABC was eager to downplay the motive behind the deadly attack. In fact, ABC was more worried about the perpetrators than the victims, warning that this could provoke an “anti-Islamic backlash” across Europe.

And on the Today show on NBC, counter-terrorism “expert” Richard Clarke seemed to blame President Trump for the rise in terror attacks that we have been seeing…

They have a good police and security service and so do we, but we have no ostracized, we’ve embraced our Muslim Americans. That’s why the talk against Muslims in the last year in the campaign and since has been very counterproductive. The only way to solve this problem is to have everyone think they’re on the same side.

Yes, let’s follow Clarke’s advice and try to convince the Islamic terrorists that we are on their side.

Until the entire western world is willing to embrace Islam and swear allegiance to Allah, the radical Islamists will never stop.  Their faith tells them that it is their destiny to rule the world, and they will never rest until they have achieved that goal.

Unfortunately, most people believe what they want to believe, and what most politically-correct pundits in the western world want to believe is that radical Islam is not the problem.

On CNN, one “analyst” even suggested that the attack in Manchester may have been a “false flag” conducted by “right-wing” extremists…

“It must also be noted that in recent months in Europe, there’s been a number of false flag plots where right-wing extremists have tried to frame Islamists for terrorism,” Cruickshank said. “We have seen that in Germany in recent weeks.”

Of course that theory didn’t last long once the authorities identified the attacker as a Muslim.

It is absolutely imperative that we understand the mindset of these Islamic radicals.  If they could press a button that would annihilate all non-Muslims on the entire planet, many of them would do it.

Some of the more “moderate” jihadists would prefer to give everyone a chance to convert to Islam first before killing them, but the end result would be the same.

There is no possible way to compromise with people that are intent on exterminating you.  And as they get their hands on more powerful weapons, the size and scale of these terror attacks is going to increase exponentially.

We must make every effort to defeat terror groups such as ISIS militarily, but even more importantly we must seek to turn hearts and minds away from radical Islam all over the planet.  It is a bankrupt worldview, and we need to show those that are following radical Islam that there is a much better way.

Unfortunately, nations all over the western world are turning away from the values and the principles that they were founded upon, and so western leaders have very little to offer at this point.

One recent report found that Islam is on track to surpass Christianity and will become the largest faith on the entire planet by the year 2070.  Violence and bloodshed will continue to be used by jihadists to advance their faith, but another way that the goal of global domination is moved forward is by migration.  Paul Nehlen, the author of an upcoming book entitled “Wage The Battle”, recently explained how this works…

“Hijrah means ‘migration in the name of Allah,’” said Nehlen, who explained that the ultimate goal is to populate non-Muslim nations to the extent needed to impose Shariah law.

“The hijrah is one way of spreading the Shariah, spreading the law of Islam, this political doctrine, to land where Islam isn’t,” Nehlen said. “That’s what this documentary covers. It talks about the bigger picture here of what we saw here. It stems directly from their fundamental texts.”

He said hijrah is another method by which Muslims can earn their salvation.

Radical Islam has declared war on us, but most liberals don’t even think that we are in a war.

And in any war, if one side chooses not to fight the other side wins by default.

The western world desperately needs to wake up, because we are in a life or death battle, and right now this fight is only in the early rounds.