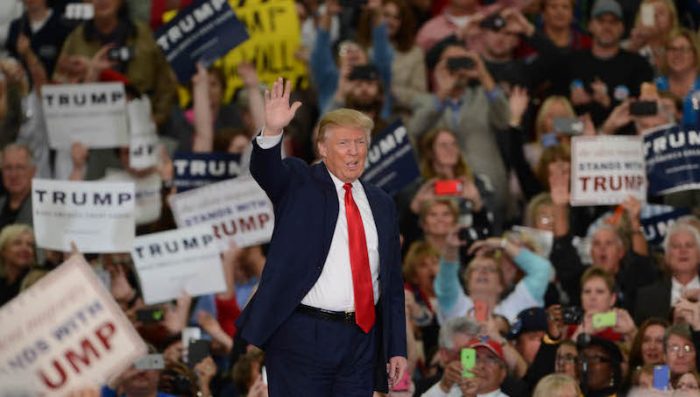 What do you think of the job that President Trump has done so far? According to Real Clear Politics, Trump has an average approval rating of just 40 percent right now, and that is extremely low for a new president. Traditionally, the American people have given new presidents a “honeymoon period” of at least six months to show what they can do. But that hasn’t happened this time, and the attacks against Trump from the Democrats and from the mainstream media have been absolutely relentless.

It is obvious that the Democrats and the mainstream media would like to see Trump removed from office as soon as possible, but one would hope that his own party would be standing behind him. Unfortunately, many prominent members of his own party have abandoned him, and Trump tweeted about that sad fact earlier today…

It’s very sad that Republicans, even some that were carried over the line on my back, do very little to protect their President.

Are you still standing behind Trump?

I have written previously about how we really need to get Trump some friends in Congress, because it has become exceedingly clear that the Republican establishment is never going to come around. For example, last week billionaire Republican donor Mike Fernandez called Trump an “abortion of a human being”…

Health care billionaire and GOP donor Mike Fernandez said Thursday that, had he been a doctor at the time, he would have killed President Donald Trump as a baby.

Trump is an “abortion of a human being … If I was the doctor and knew what that baby [Trump] would do, I’d have made sure it never would have seen the light of day,” Fernandez said.

Like many other GOP members, Fernandez joined the “Never-Trump” protests during the election, and put more than $3.5 million into anti-Trump ads in 2016. He also donated $3 million to former candidate Jeb Bush’s campaign.

Remember, Fernandez is not a Democrat.

He is a Republican, and he is saying these sorts of things about our Republican president.

And of course Jeb Bush has never stopped criticizing Trump. At one recent event, he actually suggested that Republicans should be criticizing Trump with the same passion that they criticized Obama…

He also lamented the end of civility in politics and noted that “now, strength is measured by how you insult people” in remarks critical of President Donald Trump, who earned the nomination of the Republican party instead of him.

Sometimes I think that I must be crazy for jumping into politics. The attacks on myself and my family have already been quite vicious, and I am being told that this is only just the beginning.

For Trump, vicious attacks are simply part of his everyday life now. The big mainstream news outlets are continually publishing negative stories about the Trump administration, and so I can understand why Trump tries to communicate directly with the American people through Twitter. On Sunday, there were yet more stories about President Trump’s “war” with Robert Mueller. For example, this is an excerpt from a Los Angeles Times story…

President Trump has openly declared war on Robert Mueller, the special counsel investigating the Russian saga. The president clearly wishes he could fire Mueller; his associates say he’s mused about that for weeks. Now, by stepping up the pressure, he’s moving toward a showdown, and a possible constitutional crisis.

There’s plenty of other craziness billowing from the White House: lawyers considering whether the president can pardon himself, the president publicly denouncing his attorney general for failing to protect him. But the clearest portent of a crisis is the president’s increasingly evident desire to be rid of the meddlesome prosecutor, who appears to be doing his job too well.

This relentless pounding by the mainstream media has taken a toll, and Trump’s approval ratings have been steadily falling. According to the Hill, Trump’s average approval rating in the second quarter was the lowest ever recorded for a new president…

President Trump’s average approval rating in the second quarter of 2017 was the lowest of any president’s approval rating since Gallup began tracking the number in 1945.

A Gallup poll released Friday found that President Trump’s average approval rating for the second quarter of 2017 (April 20 to July 19) was 38.8 percent, which is lower than any other president during a comparable period in their term.

For decades, the elite have been accustomed to pulling the strings in both major parties, and Donald Trump has greatly upset their delicately balanced game. The elite hope to expel Trump from the system as soon as possible and to return things in Washington to some semblance of normalcy.

And once they have dealt with Trump successfully, they will be coming down hard on everyone that helped get him elected in the first place. In case you were wondering, that includes websites such as this one.

Donald Trump started a political revolution, and this is the very best shot that we are going to get at restoring the Republic that our forefathers risked everything to establish.

If we don’t stand up and fight for our country, and the elite are able to extinguish the bright flame that Trump started, we will only have ourselves to blame.

Freedom is never free, and I am calling on men and women all over the country to stand up for America while there is still time to do so.

3 thoughts on “Do You Stand With President Trump?”