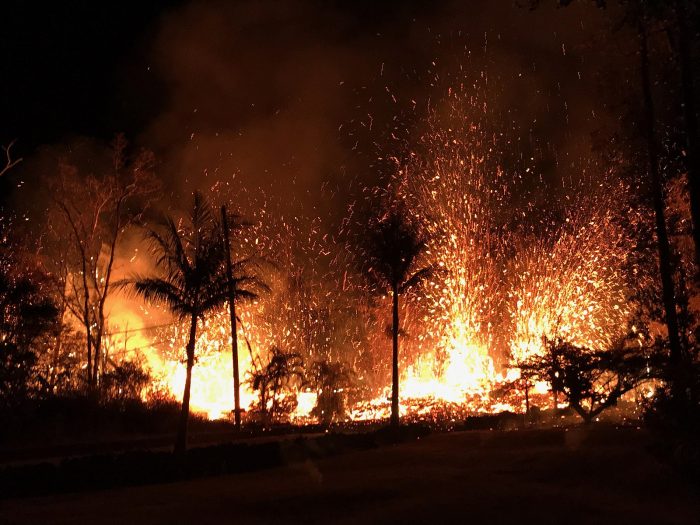 We haven’t seen anything like this since Hawaii first became a state back in 1959.  Kilauea began erupting on May 3rd, and it hasn’t stopped rumbling yet.  In fact, authorities are telling us that Hawaii has been struck by “over 12,000 earthquakes” during the last 30 days.  That is an extraordinary amount of shaking, and many are now becoming concerned that fundamental physical changes are happening to the islands.  As one USGS official has noted, we have never seen earthquakes happen on the Big Island with this sort of frequency ever before…

While most of the earthquakes have been relatively mild at magnitude 2 or 3, the largest earthquake was a massive 6.9 magnitude tremor on May 4, along with a 5.5 magnitude quake on June 4.

Brian Shiro, a supervisory geophysicist at the USGS Hawaiian Volcano Observatory, said the island was witnessing the highest rate of quakes ever measured at the summit.

On Wednesday, the biggest quake was a massive 5.6 magnitude earthquake that accompanied an eruption that shot rock and ash 10,000 feet into the sky.  The following comes from the Washington Post…

A magnitude 5.6 earthquake has struck the summit of Hawaii’s Kilauea volcano summit, sending a plume of ash and rock about 10,000 feet into the sky.

Hawaii County officials said the Wednesday eruption could cause ash to fall over some populated areas, including the towns of Volcano and Pahala.

Meanwhile, the lava just keeps flowing.  There is nothing that authorities can do to redirect or stop the rivers of lava that are coming from the volcano.  All they can do is stop and watch the inevitable destruction.

Over the past few days, lava from the volcano has destroyed hundreds more homes and has completely filled in Kapoho Bay…

On Sunday, the flow crept toward Kapoho Bay, a roughly 1,000-foot-wide ocean retreat. By Tuesday, the lava flow had completely engulfed the bay and surrounding neighborhoods.

“Kapoho Bay is gone. Wiped out. Completely filled in with lava,” wrote Hawaii News Now. The outlet reported that hundreds of homes have been destroyed, including the second home of the Big Island’s mayor. Official counts peg the loss at about 200 structures demolished by the volcano since May, according to Reuters, though they will undoubtedly rise.

You can view aerial images of the devastation right here.  Needless to say, many of those that once had oceanfront properties along Kapoho Bay no longer do so.

But there is some potentially promising news.  A rainbow was spotted directly over Kilauea, and some are taking that as a good sign.

At the same time, the people of Guatemala are calling the latest eruption of the Fuego volcano “one of the biggest in 500 years”.  A colossal avalanche of super-heated mud, rock and ash as hot as 1,300 degrees Fahrenheit caught multitudes of local residents completely off guard.  And the volcanic gases coming from the volcano alone were capable of causing rapid asphyxiation.  You can see footage of the immense devastation here, and one official is telling the media that they are finding some bodies “totally buried, like you saw in Pompeii”…

Otto Mazariegos, president of the Association of Municipal and Departmental Firefighters, said that bodies had been buried on inaccessible sites on the volcano’s south side, which overlooks the city of Antigua.

“We saw bodies totally, totally buried, like you saw in Pompeii,” he said, according to The New York Times.

There was another huge explosion that followed the initial eruption of the volcano, and at this point the total death toll has reached “at least 99”.  The following comes from NPR…

The death toll from Guatemala’s Fuego volcano rose to at least 99 on Wednesday, with many people still missing, after two strong explosions that scattered ash over a wide area and displaced thousands of residents from their homes.

The scenes of devastation were accompanied by heartbreaking stories of entire families devastated by the disaster — the biggest eruption from the mountain in four decades.

Sadly, the death toll will probably end up being much higher.

Entire families were killed instantly by the mud, ash and rock, and many of the bodies may never be found.

This is Jose. On Sunday, he left his town of El Rodeo #Guatemala said goodbye to his Mother and never saw her again. He lost 9 family members in Sunday’s #VolcanDeFuego eruption including his parents and continues to search for their bodies 3 days later @NBCLatino pic.twitter.com/PAo69zU0ZF

The saddest story that I have come across so far is from a woman named Lilian Hernandez.  She told reporters that she is missing a total of 36 family members…

Lilian Hernandez wept as she spoke the names of aunts, uncles, cousins, her grandmother and two great-grandchildren — 36 family members in all — missing and presumed dead in the explosion of Guatemala’s Volcano of Fire.

“My cousins Ingrid, Yomira, Paola, Jennifer, Michael, Andrea and Silvia, who was just 2-years-old,” the distraught woman said — a litany that brought into sharp relief the scope of a disaster for which the final death toll is far from clear.

Could you imagine losing 36 members of your family on a single day?

As I have written about so many times before, something is happening to our planet.  Large earthquakes and major volcanic eruptions are happening with increasing frequency, and this could have dramatic implications for our immediate future.

Despite all of our advanced technology, we are very much at the mercy of these enormous natural disasters, and our best and brightest minds might want to start looking into why our planet is suddenly becoming increasingly unstable.