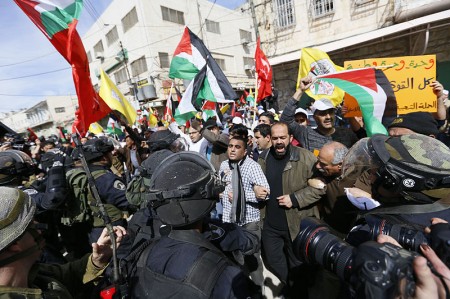 Hundreds of people attended the Monday funeral of 16-year-old Mohammed Sinokrot, who died of his wounds sustained during a protest over a week ago in the Wadi Joz neighborhood of East Jerusalem. His death sparked street violence in the area and masked rioters threw stones at police during the funeral as well, leading to the arrest of three.

The even that wounded and eventually led to the death of Sinokrot occurred on the 31st of August. His family claims that he was killed by a rubber bullet fired at his head from short range.

The Jerusalem police department denied the claims and said that officers had shot the teen in the leg, causing him to fall and hit his head, bring about his death. According to the police, officers rushed forward to arrest Sinokrot but when they saw that he was wounded they wrote down his details and ordered an ambulance to the scene.