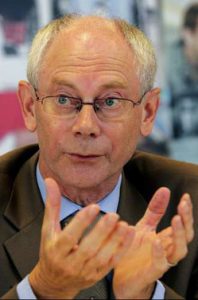 Europe’s first president, Herman Van Rompuy, plans to push for a new “Euro tax” and says that 2009 is the “first year of global governance”.

Barack Obama’s “health care reform” bill cleared a crucial hurdle in the U.S. Senate when a couple wavering Democratic Senators decided to vote in favor of it.

Patients dying from H1N1 with “wet hemorrhagic lungs, lungs with a lot of blood in them” are being reported in Iowa!

In Turkmenistan, authorities are being accused of covering up an epidemic of H1N1, with infectious-disease wards reportedly full and people actually being turned away.

In Ukraine, over 1.6 million have reported illness, over 95,000 have been hospitalized and 381 are dead since the beginning of this most recent outbreak.

Chris Shaw, a neuroscientist at the University of British Columbia, says that the H1N1 swine flu vaccine is so hazardous that he would definitely not give it to his own family.

The U.K.’s new Internet law includes a “three strikes” rule that allows your entire family to be cut off from the Internet if anyone who lives in your house is accused of copyright infringement, without proof or evidence or trial.

The International Atomic Energy Agency is concerned that Syria is working on developing a secret nuclear weapons program.

In the Midwestern United States, police are encountering a rising trend of human trafficking, often involving women and children who are forced to work as prostitutes or as unpaid labor.

A hacker had reportedly leaked thousands of emails showing a conspiracy to “hide” the real data on man made “climate change”.

Will “climategate” be one of the nails in the coffin of the myth of man made global warming?

New LED tatoos could potentially turn your skin into a computer screen.

Intel wants to have computer chips implanted in the heads of their customers by the year 2020.

The drug Ketamine, a powerful tranquilliser used on horses, is being taken in growing numbers by young people in the U.K.

Conservative Christian leaders in the U.S. unveiled a declaration on Friday calling on Christians not to comply with rules and laws forcing them to accept abortion, same-sex marriage or other serious sinful practices.

Lastly, a Vatican researcher believes that she has decoded some very faint writing on the Shroud of Turin.  What the writing says may surprise you.