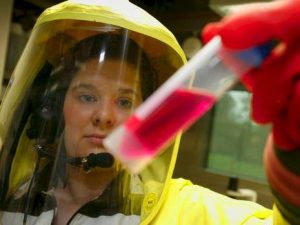 There are disturbing reports that a dangerous new virus has emerged in the Ukraine which has killed 30 people so far. Hopefully additional confirmation about this outbreak will be forthcoming.

Some international reports are referring to the new virus that has emerged in the Ukraine as the California A/N1N1 flu.

There is a report that a closed meeting has been held in the Ukraine at which participants agreed that an epidemic of the so-called “pneumonic plague” is being spread throughout the Ukraine.

News has come out that the Ukraine is closing schools and movie theaters and is placing travel restrictions on its citizens in an effort to prevent the spread of the “swine flu”.

A Ukrainian newspaper is reporting that the Health Ministry is trying to identify the deadly virus that has killed dozens of people in western Ukraine so far.

The World Health Organization is sending a team of experts to the Ukraine to investigate reports of severe H1N1 disease there.

Singer Elton John has been admitted to the hospital and is being treated for a very severe case of the flu.

There have been other unconfirmed reports of deaths from the swine flu vaccine.

In the U.K., mass swine flu vaccinations are expected to be extended to all children under the age of 18 by the end of the year.

The Pentagon will offer the H1N1 swine flu vaccination to detainees at the U.S. detention facility at Guantanamo Bay.  Isn’t that generous of them?

The main challenger to Afghan President Hamid Karzai announced on Sunday that he is withdrawing from the November 7th presidential runoff election.  Considering that Karzai is a U.S. puppet leader, is there any real surprise that the fix is in?

The Washington Post is claiming that the White House “appears committed” to sending up to 15,000 more soldiers to Afghanistan.

You can read all 1990 pages of the horrific health care reform bill here.

Is the city of Detroit “ground zero” for the deindustrialization agenda of the global elite?

Ron Paul says that we all must be “prepared for the worst” regarding the struggling U.S. economy.

A Switzerland-based cosmetics manufacturer is openly admitting that some of its products were developed from the tissues of an aborted baby.

One researcher is claiming that a “dark comet” could be headed our way in 2012.

Is the effort to “control the climate” actually more about controlling humanity?

The head of the U.N. is declaring that “global governance” is needed to fight the threat of global warming.

CNN recently ran an enlightening report on Freemasons in the U.S. Congress.

Was the Cash for Clunkers program a success?  Well, it turns out that U.S. taxpayers paid $24,000 for each worthless car.

Is there a secret plan for a European income tax?

Legislation that Ron Paul introduced to audit the Federal Reserve has been “gutted” while moving toward a possible vote in the Democratic-controlled House.

Barack Obama has announced the end of a ban on travel to the United States by people who have tested positive for the virus that causes AIDS, fulfilling a promise he made to gay advocates.

There are new reports that Barack Obama has given financial donors inappropriate perks such as use of the White House cinema, golf games with the Commander-in-Chief and even the chance to shape White House policy.

Lastly, the European Union is actually drawing up plans for aircraft-style black box recorders to be installed in all cars to help the police identify who is responsible for crashes.