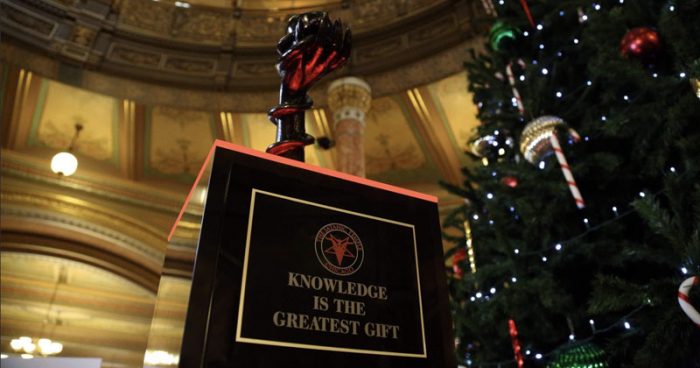 If you go into the Illinois Capitol rotunda right now, you will find a Christmas-themed Satanic sculpture that has been entitled “”The Snaketivity”. The sculpture features an arm holding an apple with a snake coiled around it. Obviously, this is a very clear reference to the temptation of Adam and Eve in the Garden of Eden. Underneath, there is an inscription that says “Knowledge Is The Greatest Gift”. This sculpture was a “gift” from the Satanic Temple of Chicago, and it will only be up temporarily. Other faiths have traditionally had prominent displays in the rotunda this time of the year, and so the Satanic Temple saw an opportunity to get their message out, and officials in Illinois felt that they must allow the Satanists to exercise their First Amendment rights…

The sculpture sits under the Capitol’s rotunda along with other traditional religious displays, including a Christmas nativity scene and a menorah for Hanukkah.

“Under the Constitution, the First Amendment, people have a right to express their feelings, their thoughts,” spokesman for the secretary of state Dave Druker said Monday. “This recognizes that.”

Not too far away from “the Snaketivity”, there is a sign which goes into more detail about why the State of Illinois has allowed this to happen…

“The State of Illinois is required by the First Amendment of the United States Constitution to allow temporary, public displays in the state capitol so long as these displays are not paid for by taxpayer dollars. Because the first floor of the Capitol Rotunda is a public place, state officials cannot legally censor the content of speech or displays. The United States Supreme Court has held that public officials may legally impose reasonable time, place and manner restrictions regarding displays and speeches, but no regulation can be based on the content of the speech.”

Speaking as a former attorney, that is complete and utter nonsense.

The state of Illinois does not have to allow any public displays in the state capitol. But if they allow other religious displays such as a Christmas tree, then according to federal court rulings they must make space available for other faiths.

So the solution to this problem is actually really easy. The state of Illinois should just end all public displays for the holiday season.

But instead, they have chosen to allow a monument to Satan to be put up in their state capitol building, and that is just shameful.

Of course the Satanists are absolutely cherishing their little victory. They have even created a GoFundMe campaign which explains what they are attempting to do…

“The Satanic Temple—Chicago will no longer allow one religious perspective to dominate the discourse in the Illinois State Capitol rotunda during the holiday season. … Please consider what you may do to help us bring Satan to Springfield!”

If our founders were around today, they would be marching on Springfield right now.

We have allowed everything to be turned upside down, and we don’t even know how to tell right from wrong anymore.

And now that the Satanic Temple has been successful in Illinois, it is inevitable that they will be demanding the right to “exercise their First Amendment rights” in state capitol buildings all over the nation.