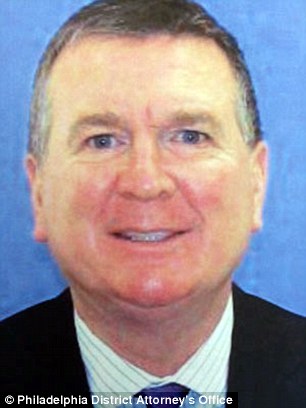 A Philadelphia personal injury lawyer has surrendered to authorities on charges that he had sex with a 14-year-old sex slave a dozen times, including at work in his downtown office.

District Attorney Seth Williams announced Tuesday that 56-year-old Brian Meehan is accused of being a client of a sex trafficking ring in a case spanning from Pennsylvania to Georgia.

The girl was held captive just blocks from her Philadelphia home in March 2012 and sometimes hired out 20 times a week, Williams said at a press conference.

‘There is a special place in hell for people like Brian Meehan,’ the district attorney told reporters Tuesday.

1 thought on “Married lawyer, 56, ‘had sex with 14-year-old human trafficking victim who was being prostituted 20 TIMES a week’”