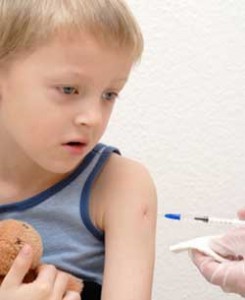 Britain’s national medical laboratory says that one H1N1 swine flu sample taken from a patient in Ukraine had mutated so much from the original H1N1 swine flu that the swine flu vaccine probably would not protect against it well.

The “D225G” H1N1 mutation has now been found in fatal or severe cases in Ukraine, Brazil, Norway and China.

France’s Health Surveillance Institute is saying the following about this mutation…..

“The mutation could increase the ability of the virus to affect the respiratory tracts and, in particular, the lung tissue.”

Even though it has been acknowledged that the H1N1 vaccine will not work effectively against one of the new mutations, the French people are still being encouraged to run out and get injected with it.

About 1.5 million cases of acute respiratory illness and H1N1 flu have been reported in Belarus.

The WHO has announced that the global number of H1N1 deaths jumped by more than 1,000 in one week.

This past week witnessed a record number of U.S. pediatric deaths from the H1N1 swine flu.

The last seven days has seen a record number of H1N1 swine flu deaths in the U.K.

Russia Today is reporting that some top WHO officials are on the payroll of swine flu vaccine manufacturers.

It is being reported that the H1N1 swine flu and H5N1 bird flu viruses are being mixed together by a French professor named Bruno Lina, affiliated with WHO, potentially creating a highly lethal virus.  This “research” is being conducted under the pretext of having to predict the course of a future pandemic.

The French Ministry of the Interior has announced that the French army’s medical corps is to help carry out vaccinations in the country’s 1080 vaccine centers.

A U.K. Parliamentary briefing note published in November 2009 maintains that the U.K. government has the power to impose compulsory swine flu vaccinations under the Civil Contingencies Act of 2004.

In Australia, the H1N1 swine flu will be included in next year’s seasonal influenza vaccine, despite more than 650 adverse reactions to the vaccine.

Israel suspended their swine flu vaccination campaign on October 22nd following the deaths of four people from the vaccine.

One Russian lawmaker has called for Russia to withdraw from the WHO if an investigation into the alleged collusion between the WHO and pharmaceutical companies on the swine flu proves to be accurate.

Is Climategate one of the worst scientific scandals of our generation?

Will Climategate stop Barack Obama from pushing through his cap and trade scheme?

The Danish parliament has passed legislation just in time for the upcoming Copenhagen Treaty meetings which will give police sweeping powers of “pre-emptive” arrest and extend custodial sentences for acts of civil disobedience.

Commonwealth nations representing one-third of the world’s population have thrown their collective weight behind accelerating efforts to clinch an “operationally binding” U.N. climate deal in Copenhagen.

Australian scientists have announced that they are hoping to breed sheep that burp less as part of efforts to combat climate change.

Federal Reserve Chairman Ben Bernanke says that any effort by Congress to audit the Federal Reserve would “seriously impair” economic stability in the United States.

Bankers with Rothschild ties have been appointed to help restructure Dubai World with a mandate to dispose of some of their most famous assets.

A new article in the Toronto Star entitled “One Generation Is All They Need” contains this stunning statement…..

“One day we will all happily be implanted with microchips, and our every move will be monitored. The technology exists; the only barrier is society’s resistance to the loss of privacy.”

Food stamp use in the U.S. is at record highs and is climbing every month.  In fact,  the program now helps feed one in eight Americans and one in four children.

Virtually all of the camping grounds within 100 miles of Los Angeles are now filled with people living in them.

A sheriff’s official in Washington state says that four police officers have been shot dead in an ambush at a coffee house.

Some are now even trying to blame “prosperity preaching” for the global economic crash.

Are nanoparticles in some vitamins, cosmetics, sunscreens and paint causing genetic damage?

The 3rd Circuit U.S. Court of Appeals in Philadelphia has upheld one school district’s ban on popular Christmas carols such as “Silent Night,” “Joy to the World,” “Oh, Come All Ye Faithful” and “Hark the Herald Angels Sing”.

A shocking new program proposed at the University of Minnesota would result in required examinations of teacher candidates on “white privilege” as well as “remedial re-education” for those who hold the “wrong” views.

An inventor from South Africa reportedly discovered a microchip implant in his shoulder when having a tumor removed from that area. It turns out that the microchip was manufactured by VeriChip and he has no idea how it got there.

Lastly, airlines are increasingly have difficulties with obese passengers who simply cannot fit into their seats.