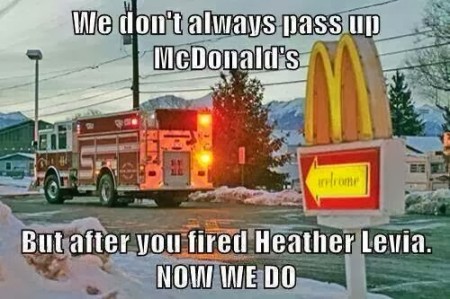 A McDonald’s restaurant in New York fired a worker after 8 years because she “opened a whole bee’s nest” by buying food for firefighters after they put out a house fire, she said this week.

Heather Levia, 23, told WIVB that she was working as a manager when the group of firefighters came in and ordered 23 breakfast sandwiches after fighting the blaze. It was a cold day so Levia covered the $83 cost of the meals herself.

“Just because I appreciate everything they do,” she said.

When more firefighters came in and ordered $70 worth of food, Levia wanted to cover those meals too. But she is a single mother with twins who is working two jobs to put herself through nursing school.