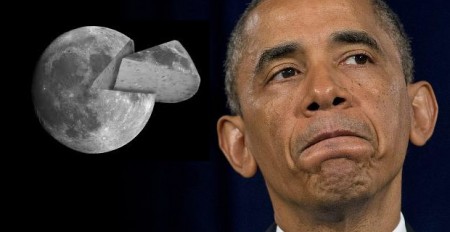 President Barack Obama said denying climate change is like arguing the moon is made of cheese, as he issued a call to action on global warming to Saturday’s graduates of the University of California, Irvine.

Obama issued the call to the tens of thousands gathered at Angel Stadium even though he said Congress ‘is full of folks who stubbornly and automatically reject the scientific evidence’ and say climate change is a hoax or fad.

Obama said others duck the question.

‘They say, “Hey, look, I’m not a scientist.” And I’ll translate that for you: what that really means is, “I know that manmade climate change really is happening but if I admit it, I’ll be run out of town by a radical fringe that thinks climate science is a liberal plot,’” he said.