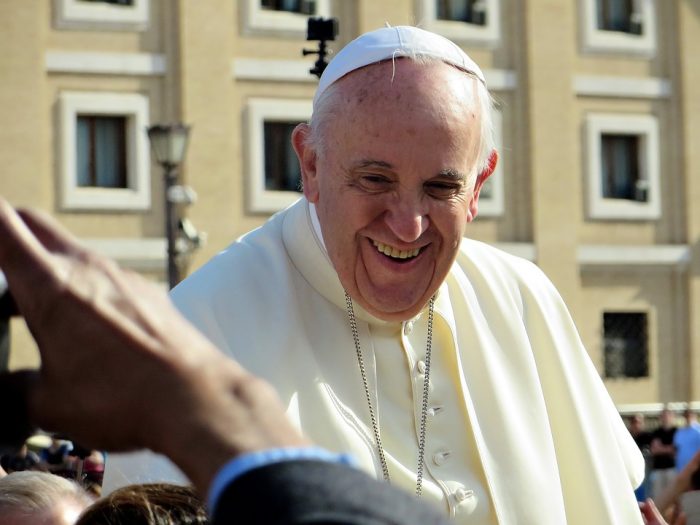 When I first started seeing headlines that claimed that Pope Francis said that “Muslim terrorism does not exist”, I thought that it couldn’t possibly be true.  After all, who could possibly deny that Islamic radicals are engaged in terrorism?  Within the last 30 days, there have been 127 Islamic terror attacks in a total of 25 different countries.  And in 2016 global terror attacks set an all-time record high and were up 25 percent from the year before.  Unfortunately, there are many world leaders that are so politically correct and that are so married to the idea that Islam is good that they cannot admit to themselves that radical Islamic terror is being fueled by radical Islamic beliefs.  And in the case of Pope Francis, he is exceedingly careful never to say anything negative about Islam because it would greatly hinder his efforts to bring all of the major religions of the planet closer together.

To say that “Muslim terrorism does not exist” is such an outrageous statement that I needed to get solid confirmation that Pope Francis actually said these exact words.  And I got that confirmation from the official Vatican website…

The other is a reflection that I shared at our most recent World Meeting of Popular Movements, and I feel is important to say it again: no people is criminal and no religion is terrorist. Christian terrorism does not exist, Jewish terrorism does not exist, and Muslim terrorism does not exist. They do not exist. No people is criminal or drug-trafficking or violent. “The poor and the poorer peoples are accused of violence yet, without equal opportunities, the different forms of aggression and conflict will find a fertile terrain for growth and will eventually explode.”[7] There are fundamentalist and violent individuals in all peoples and religions—and with intolerant generalizations they become stronger because they feed on hate and xenophobia. By confronting terror with love, we work for peace.

According to Pope Francis, if Islamic terrorists were simply given “equal opportunities” we could solve the problem of global terror once and for all.

What in the world is he thinking?

The truth is that some of the wealthiest nations on the entire planet such as Saudi Arabia, the United Arab Emirates and Qatar are funding and arming radical Islamic groups all over the globe.

And often the primary targets for radical Islamic terrorists are Christians and Christian churches.  For example, just consider what just happened in Uganda…

Several weeks ago, we reported how Muslims attacked a Christian church during services in Uganda. They locked the Christians in the church and then attacked them, raping 15 women, kidnapping several and beating the rest. The story made international headlines.

Well in a recent story, the local news media in Uganda has tried to whitewash what happened, saying that it was a ‘mania’ that broke out after Christians praying for the return of an ‘unnamed prophet’ got mad when the supposed ‘prophet’ did not appear.

In the meantime, Christians in the area have continued to receive threats from the Muslims, and the local pastors are reporting seeing Muslims at night walking close to the church where the attack happened while brandishing weapons.

According to Pope Francis, if each of those Muslims was given a good job, a nice house, a Honda and a 401K plan they wouldn’t want to commit those types of attacks any longer.

He told WND the background: The girl was attacked by “fanatic Muslim men and woman” while walking home from school, dragged to a nearby home and subjected to “brutal female genital mutilation.”

She was left in a coma.

After local physicians had given up and declared her dead, she suddenly sat up.

The girl described how her soul “left my body and I was dead.”

“Angels came to receive me to heaven. But Jesus appeared before me and said, ‘I cannot turn back from the prayers of my children. My eyes are upon my children and ears are open to their prayer. So I give you your life back, for the issues of death belong to me. You go, and be my witness.’ Then he put his face right against and right into mine. He breathed into my nostrils, and my soul went in. Then he moved his nail-scarred hands over my body and healed me completely!”

What an incredible story!

Stories such as this one need much more publicity, but the mainstream media and politically correct leaders such as Pope Francis avoid them like the plague because they don’t fit the narrative.

To the global elite, Islam must always be portrayed as good, because it is going to be a key player in the coming one world religion.

Another essential element of globalism is an unshakeable belief in man-made climate change.  In the same speech that I referenced above, Pope Francis once again affirmed his stance that global warming is an extreme danger to humanity.  Here is more from the official Vatican website…

First, the ecological crisis is real. “A very solid scientific consensus indicates that we are presently witnessing a disturbing warming of the climatic system.”[6] Science is not the only form of knowledge, it is true. It is also true that science is not necessarily “neutral”—many times it conceals ideological views or economic interests. However, we also know what happens when we deny science and disregard the voice of Nature. I make my own everything that concerns us as Catholics. Let us not fall into denial. Time is running out. Let us act. I ask you again—all of you, people of all backgrounds including native people, pastors, political leaders—to defend Creation.

Ever since the very beginning of his papacy, Pope Francis has been pushing for global unity in religious matters, global unity in economic matters and global unity in political matters.  The following timeline of events comes from one of my previous articles…

May 2016: Pope Francis welcomed one of the top Sunni clerics in the world to the Vatican, and he reportedly told the cleric that “our meeting is the message“.  And mainstream news outlets all over the planet clearly understood what was being communicated.  For example, the Daily Mail article about this meeting was entitled “Pope embraces grand imam at historic Vatican meeting in a bid to bring the Catholic and Muslim churches together“.

January 2016: The Vatican releases an extremely disturbing video in which Pope Francis declared that all of the major world religions are “seeking God or meeting God in different ways” and that ultimately “we are all children of God”.  The video also featured leaders from various major religions, and they are shown declaring fidelity to their particular gods.  First, we see a female Buddhist cleric tell us “I have confidence in the Buddha“, and that is followed by a Jewish rabbi declaring “I believe in God“.  As the video goes on, a Catholic priest announces “I believe in Jesus Christ“, and last of all an Islamic leader boldly declares “I believe in God, Allah“.  If you have not seen the video yet, you can watch the entire thing right here.  After watching that video, nobody can deny that the Vatican is openly promoting a one world religion.

September 2015: During a stop at St. Patrick’s Cathedral, Pope Francis stressed the unity between Christianity and Islam.  These words were directly spoken by him…

June 2014: For the first time in the history of Catholicism, Pope Francis authorized “Islamic prayers and readings from the Quran” at the Vatican.  In ancient times, this would have been considered blasphemy, but today nobody really even notices when something like this happens.

The evidence very clearly shows that Pope Francis is a globalist, and the globalists are absolutely convinced that this planet could be transformed into some sort of great progressive utopia if they could just get humanity to unite.

But when they are finally able to achieve their goal, it won’t be a utopia at all. Instead, it will bring about the greatest tyranny that humanity has ever experienced, and this is something that I talk about in my latest book.

Whenever you deny the truth, you open yourself up for deception.

And everyone out there that chooses to believe that Islam has nothing to do with terrorism and that all religions are equally valid paths to the same God is opening the door wide to great deception.

In this day and age, it is imperative that we all learn how to think for ourselves and to boldly speak the truth – even if that means disagreeing with the Pope himself.