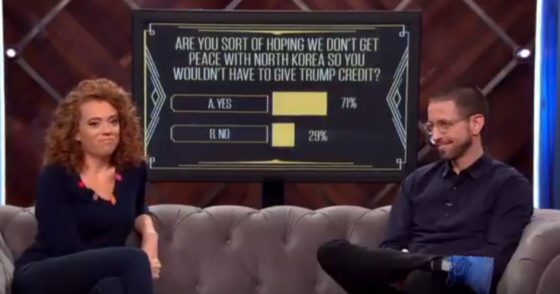 This is another example that shows how broken our country has become.

A live TV poll taken on Michelle Wolf’s Netflix show found that 71% of the comedian’s liberal audience would rather peace with North Korea fail than see Donald Trump take credit for it.

The audience was asked, “Are you sort of hoping we don’t get peace with North Korea so you wouldn’t have to give Trump credit?”

Only 29% said they wanted peace with North Korea given the option.

Video: 71% of audience for @MichelleIsaWolf’s @Netflix show @TheBreakNetflix says yes to “hoping we don’t get peace with North Korea so you wouldn’t have to give Trump credit.” #TTT pic.twitter.com/z4S7Y4WgQq