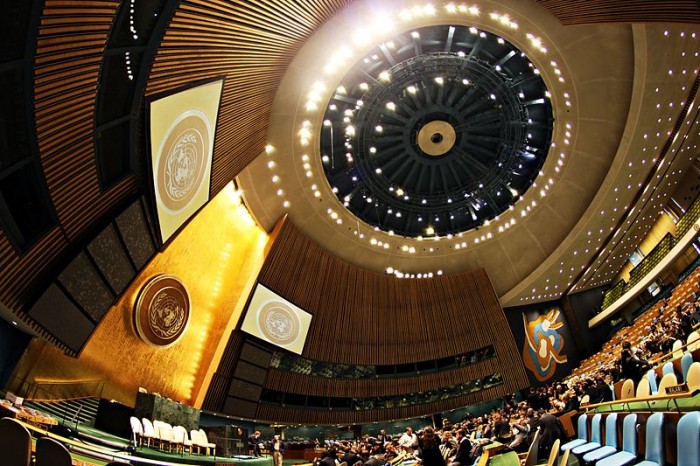 Last Wednesday, the UN General Assembly overwhelmingly voted to adopt 6 outrageous anti-Israel resolutions.  These resolutions address a wide variety of issues including “a two state solution”, the status of the Golan Heights and a “lasting solution to the question of the City of Jerusalem”.  Unlike UN Security Council resolutions, these UN General Assembly resolutions are not considered to be legally binding upon the parties, but they do show that virtually the entire planet is in favor of dividing the land of Israel and the city of Jerusalem.  In addition, even though the U.S. voted against each of these resolutions, there is still a tremendous amount of buzz that the Obama administration may decide to go along with a UN Security Council resolution that would set the parameters for a “two state solution” before the end of Barack Obama’s term comes on January 20th.

I have not seen a single mainstream news article about these UN General Assembly resolutions that were just passed.  The only way that I learned about them is because someone sent me a link to an announcement on the official UN website.  In this article I want to share with you some extended excerpts from that announcement so that you can see for yourself exactly how the UN feels about Israel.

The first resolution that was adopted calls for an “intensification of efforts” to bring about “a final peace settlement” between the Israelis and the Palestinians.  Of course any “final peace settlement” would mean a “two state solution” that permanently divides the land of Israel into two separate nations.  153 countries voted in favor of this resolution, but fortunately the United States was one of the seven nations that voted against it…

The Assembly adopted a resolution on the peaceful settlement of the question of Palestine (document A/71/L.21) by a recorded vote of 153 in favour to 7 against (Canada, Federated States of Micronesia, Israel, Marshall Islands, Nauru, Palau, United States), with 7 abstentions (Australia, Cameroon, Honduras, Papua New Guinea, Paraguay, Tonga, Vanuatu).  By the terms of the resolution, the Assembly called for the intensification of efforts by the parties, including through negotiations, with the support of the international community, towards the conclusion of a final peace settlement.

The next resolution that was adopted addressed the status of Jerusalem.  The resolution refers to Israel as “the occupying power”, and it calls for the city to be permanently divided between the Israelis and the Palestinians.  Once again, the vote in favor of this resolution was incredibly lopsided…

The Assembly also adopted a resolution on Jerusalem (document A/71/L.22) by a recorded vote of 149 in favour to 7 against (Canada, Federated States of Micronesia, Israel, Marshall Islands, Nauru, Palau, United States), with 8 abstentions (Australia, Cameroon, Guatemala, Honduras, Panama, Papua New Guinea, Paraguay, Vanuatu).  By its terms, the Assembly reiterated its determination that any actions taken by Israel, the occupying Power, to impose its laws, jurisdiction and administration on the Holy City of Jerusalem were illegal and therefore null and void and had no validity whatsoever, and called upon Israel to immediately cease all such illegal and unilateral measures.  The Assembly also stressed that a comprehensive, just and lasting solution to the question of the City of Jerusalem should take into account the legitimate concerns of both the Palestinian and Israeli sides.

Subsequently, the UN General Assembly also passed a resolution that calls for Israel to withdraw from the Golan Heights.  Sadly, the vote in favor of this resolution was also overwhelming…

By the terms of a resolution on the Syrian Golan (document A/71/L.8), the Assembly demanded that Israel withdraw from all the occupied territory to the line of 4 June 1967 and called on all parties concerned to exert the necessary efforts to ensure the resumption of the peace process.  That resolution received 103 in favour to 6 against (Canada, Federated States of Micronesia, Israel, Marshall Islands, Palau, United States), with 56 abstentions.

The General Assembly also passed three other anti-Israel resolutions last Wednesday, but none of them were nearly as important as the first three that I described.  But just like with the other resolutions, the votes were not even close…

In adopting a resolution on the Special Information Programme on the Question of Palestine of the Department of Public Information of the Secretariat (document A/71/L.20), the Assembly renewed the Department’s mandate.  It also requested the Department to disseminate information on all activities relating to the question of Palestine and peace efforts and to organize and promote fact-finding news missions for journalists to the Occupied Palestinian Territories, including East Jerusalem, and Israel.  That text garnered 153 votes in favour to 7 against (Australia, Canada, Federated States of Micronesia, Israel, Marshall Islands, Palau, United States), with 7 abstentions (Cameroon, Honduras, Nauru, Paraguay, Togo, Tonga, Vanuatu).

Needless to say, the Palestinians were absolutely thrilled by the outcome of these votes.

In fact, the Palestinian representative at the United States boldly declared that these resolutions represent “a clear reaffirmation of the international community’s consensus on the two-State solution”.

And it is true – virtually the entire planet wants to see the land of Israel and the city of Jerusalem permanently divided.

If Barack Obama betrays Israel at the United Nations between now and January 20th, it will be one of the most prophetically significant events that we have ever seen, and the consequences for this nation (and for the rest of the world) will be exceedingly severe.

As you can see from the UN General Assembly resolutions discussed above, there is a global consensus that the land of Israel should be divided, and the only one standing in the way right now is Barack Obama.

Let us hope that he doesn’t decide to do something extremely foolish before handing over the reigns to Donald Trump in late January.