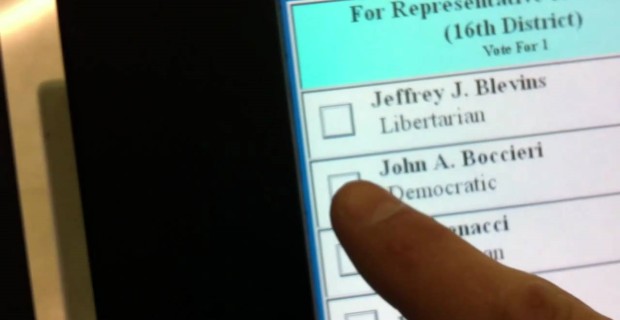 The trustworthiness of electronic voting machines has once again come under scrutiny after a touch screen in North Carolina flipped a man’s vote from Democrat to Republican in a key Senate race.

“Percy Bostick, 69, of Greensboro said he tried casting a vote for Democrat Kay Hagan at the Old Guilford County Courthouse, only to have the machine register Republican Thom Tillis as his choice,” reports the News-Record.

Bostick was forced to vote four times before the machine accurately recorded his choice.

With just over a point separating Tillis and Hagan in this crucial contest, any impropriety centered on electronic voting machines is likely to cause a dispute if the margin of victory is smaller than the amount of votes cast on touch screen systems.

This is by no means the first time that electronic touch screens have flipped votes in the run up to the mid-term elections.

A woman who voted early last week in Montgomery County, Md. saw her three votes for Republican candidates flip to Democrat right before her eyes. The error was subsequently blamed on a “calibration issue.”