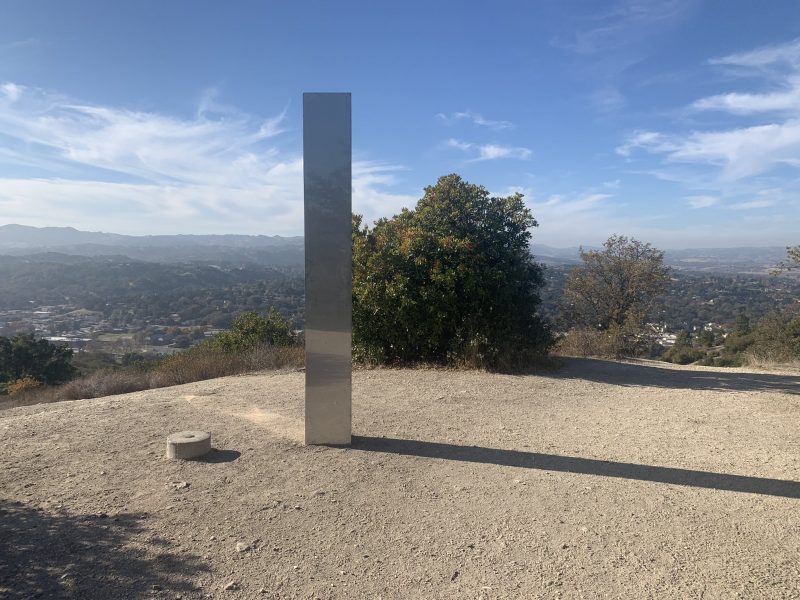 When a huge silver monolith was spotted in a very remote section of the desert in southeastern Utah, it immediately created a media sensation. But then it disappeared. A similar monolith had also been discovered in Romania, but now it is gone too. Then on Wednesday, everyone was buzzing about a third monolith that had been spotted in California. They are being called “alien monoliths”, but nobody knows who created them or if the three monoliths are even from the same source. But after being bombarded by the science fiction movies that Hollywood has been creating for decades, the world is definitely hungry for news that we are being contacted by someone from beyond.

Officers from the Utah Department of Public Safety’s Aero Bureau were flying by helicopter last Wednesday, helping the Division of Wildlife Resources count bighorn sheep in southeastern Utah, when they spotted something that seemed right out of “2001: A Space Odyssey.”

“One of the biologists … spotted it, and we just happened to fly directly over the top of it,” pilot Bret Hutchings told CNN affiliate KSL. “He was like, ‘Whoa, whoa, whoa, turn around, turn around!’ And I was like, ‘What.’ And he’s like, ‘There’s this thing back there — we’ve got to go look at it!'”

The Utah monolith appears to have been riveted together, and that would seem to indicate that human technology was used to construct it. We are being told that it was definitely very sturdy, and helicopter pilot Bret Hutchings estimated that it was “between 10 and 12 feet high”…

And there it was — in the middle of the red rock was a shiny, silver metal monolith sticking out of the ground. Hutchings guessed it was “between 10 and 12 feet high.” It didn’t look like it was randomly dropped to the ground, he told KSL, but rather it looked like it had been planted.

Subsequently, Internet sleuths discovered exactly where the Utah monolith was located and they used Google Earth to determine that it had appeared some time between August 2015 and October 2016…

After that, a Reddit user was able to find the monolith on Google Earth. The coordinates of the strange monolith are 38.343080°, -109.666190° and plugging that into Google Earth shows you it’s just south of Dead Horse Point State Park, between the park and Needles Point, a tourist outlook. Others used Google Earth’s historical imaging data to narrow the appearance of the monolith in the area sometime between August of 2015 and October of 2016. As one of the internet sleuths pointed out, the three-sided monolith is miles from the closest paved road.

So it isn’t as if this monolith came out of nowhere. Apparently it had been there for as long as five years.

The world was stunned when the Utah monolith suddenly disappeared, and at first nobody knew what happened to it.

As mysteriously as it showed up, the strange monolith disappeared, and Sylvan Christensen and Andy Lewis now say they’re among those responsible, according to reports.

“We removed the Utah monolith because there are clear precedents for how we share and standardize the use of our public lands, natural wildlife, native plants, fresh water sources, and human impacts upon them,” Lewis and Christensen said in a statement sent to Grit Daily.

They even posted a video on YouTube that shows them removing the monolith.

Christensen and Lewis are just private citizens, and so it was rather presumptuous for them to grab what could have been a potentially important object.

I think that it is quite likely that they will be getting a visit from law enforcement authorities.

Shortly after the Utah monolith was discovered, another monolith popped up in Romania…

The mysterious metal structure in Romania was found a few metres from the well-known archaeological landmark the Petrodava Dacian Fortress.

It is a dark metallic colour and appears to be covered in concentric scribble-like rings.

The shiny triangular structure has a height of about four metres and one side faces Mount Ceahlau, known locally as the Holy Mountain.

Could it have been created by a copycat?

At this point we don’t know, and it is being reported that it is now gone…

That could have been the end of the story, but now another monolith has been found in California…

Now, yet another monolith has been discovered, this time in California.

This new monolith appears to be fairly flimsy, and according to a local news report it was first spotted on Wednesday morning…

According to local newspaper The Atascadero News, the monument appeared on the mountain on Wednesday morning. Hikers naturally flocked to take in the shiny metal object.

A few years ago, the “creepy clown” phenomenon took America by storm as hordes of copycats were inspired by a few initial news stories.

It looks like the same sort of thing may be happening again.

We live at a time when people are always looking for the next big social media stunt, and these monoliths have definitely gotten a lot of attention.

Meanwhile, our world is literally coming apart at the seams all around us, and things are only going to get worse in the years ahead.

When reality is unpleasant, many would rather focus on just about anything else, and these monoliths are definitely an interesting distraction. But all three of them appear to have been created by humans using very common technology, and so they aren’t signs that the “aliens” are about to arrive after all.

But without a doubt, our world has become a very strange place and it is getting stranger with each passing day.