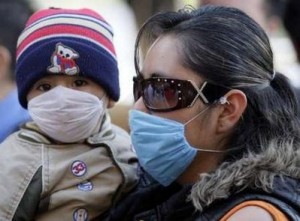 The most important news for Wednesday, November 4th, 2009…..

The number of people sick in the Ukraine from the mystery respiratory illness has nearly doubled to almost a half million people.

Recombinomics is reporting that the severe respiratory disease cases in Ukraine “are clearly hemorrhagic disease that fills lungs with blood and produces bleeding at all orifices, which are stark reminders of 1918 pandemic cases which were also linked to a swine H1N1.”

The cases of the mystery illness in Ukraine appear to be clustered, raising concerns that the H1N1 swine flu virus could have mutated.

On Steve Quayle’s website, one eyewitness reportedly from Romania is claiming that the mystery disease in Ukraine is the pneumonic plague, and that it has already spread to Romania, Bulgaria, and Hungary.

Many Ukrainians are buying into the rumor that Ukraine has been infected with pneumonic plague by their neighbor Russia.

A registered nurse in Tennessee is speaking out about a large number of flu vaccine horror stories there.

Nearly half the adults in the United States are saying that they want nothing to do with the swine flu vaccine.

Bird flu has broken out in Vietnam once again.

Is Al Gore now saying that carbon dioxide is not the primary cause of “global warming”?

Is global warming being used as a pretext to move us towards world government?

Sources are claiming that the core focus of the G20 meeting this weekend will be to discuss ditching the Dollar and implementing a global centralized monetary system.

Many conservative commentators are becoming quite alarmed that the Copenhagen Treaty would give an as yet unnamed U.N. body the power to directly intervene in the financial, economic, tax and environmental affairs of all the nations that sign the Copenhagen treaty.

The Israeli government says that Hamas has successfully tested a rocket with sufficient range to strike Tel Aviv for the first time.

On Tuesday Maine voters struck a serious blow to the gay agenda by voting to repeal Maine’s gay marriage law.

A new report from the U.S. military’s Joint Special Operations University suggests that the U.S. government should set up a “National Manhunting Agency” to go after jihadists, drug dealers, pirates and other enemies of the state.

An Italian judge says that he has convicted 23 Americans of the 2003 kidnapping of an Egyptian cleric from a Milan street in a CIA extraordinary rendition.

Big Hollywood has uncovered 11 incredibly disturbing videos of schoolchildren all over the United States singing praises to Barack Obama.

Some analysts are speculating that the new ABC series “V” has hidden messages in it that are meant to attack Obamamania.

Lastly, crucifixes have been banned from Italian schools in a shocking ruling from the European Court of Human Rights.