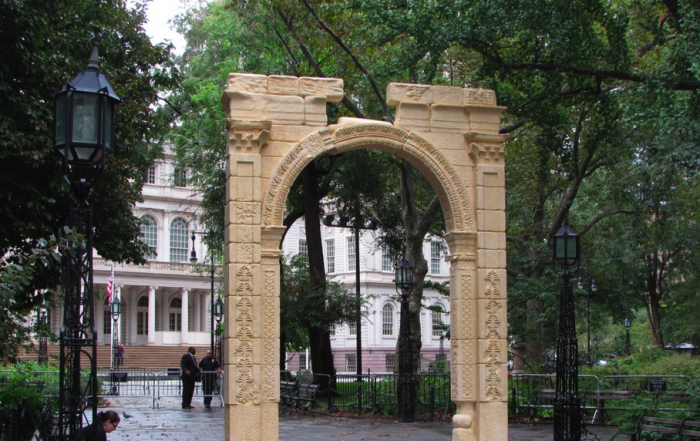 A reproduction of the infamous Arch of Palmyra will be on display in Washington D.C. from September 26th to September 30th. In ancient times, if you wanted to go to the Temple of Baal in Palmyra you had to pass through this arch, and you would also pass through this arch again on your way out. The original arch was destroyed by ISIS in 2015, but it has been reproduced, and the reproduction has been periodically displayed at important locations around the globe. It has been pointed out that an arch is a “gateway”, and many are concerned that erecting this arch may be an open invitation for the entity or entities that were originally associated with this arch. And the timing for putting this arch on display in Washington D.C. is also very curious, and I will discuss that at the conclusion of this article.

Let’s take this one step at a time. The organization that is putting this arch on display in D.C. later this month says that it is a “symbol of peace and resilience”…

A reconstructed Arch of Palmyra, the original of which was the entrance to a temple for Baal in Syria, will reappear in Washington, D.C., as an “improbable” “symbol of peace and resilience,” according to Breaking Israel News.

The original in the Middle East was destroyed by ISIS in October 2015, but it was re-created by the Institute for Digital Archaeology using 3-D printing technology.

WND reported last year when the arch was in New York City and London, and later when it was placed outside a global summit in Dubai. More recently, it was constructed for the G7 Summit in Florence, Italy.

It will be up for five days at the end of this month, and then it will be taken down.

This arch stood in front of the ancient “Temple of Bel”, and that temple was later converted first into a church and then subsequently into an Islamic mosque. The following summary comes from Breaking Israel News…

The original Roman victory arch was built in Palmyra, Syria at the end of the second century CE. Originally it stood in front of the Temple of Bel where pagans worshiped the Mesopotamian god, also known as Ba’al, in a form of idol worship that figures prominently in the Bible. The temple was dedicated in 32 CE but was constructed on the site of a pre-existing temple that goes back to the third millennium BCE.

The Temple of Bel, along with many other pagan places of worship in the area, was converted into a Catholic church during the Byzantine Era. Parts of the structure were modified by Arabs in 1132 who preserved the edifice and converted the Temple into a mosque.

The original arch was destroyed by the Islamic State (ISIS) in October 2015, but one year later, the Institute for Digital Archaeology (IDA) used 3-D printing technology to reproduce a 20-foot full-scale replica.

In ancient times, “Bel” and “Baal” were two names for the same ancient pagan deity. And once we start digging into where this deity originally came from, we discover some absolutely startling things.

In a previous article, I included a quote from Wikipedia that discusses how “Bel” is an ancient Babylonian term for “Lord” or “Master”, and that “Baal” comes from that original root word…

The title of “Bel” or “Baal” seems to have originally been used primarily for the Babylonian god Marduk. Here is more from Wikipedia…

So where did “Marduk” come from?

Well, many scholars have traced the worship of Marduk all the way back to the historical figure of Nimrod…

Are you starting to see how everything fits together?

What makes all of this far more alarming for our day and time is the fact that a number of prominent scholars such as Tom Horn, Dr. Michael Lake and Peter Goodgame are convinced that there seems to be a very strong link in the Scriptures between the coming Antichrist and the historical figure of Nimrod.

So could it be possible that when we are erecting these symbols that we are laying out “welcome mats” for the Antichrist?

For those that are familiar with the Bible, you already know that Baal worship is mentioned extensively throughout the second half of the Old Testament.

The worship of Baal involved very sick and twisted acts, and this is something that I discussed in another one of my previous articles…

It is quite interesting that this monument to Baal will be going up during the time that the confirmation of Brett Kavanaugh is being debated in Washington.

Could it be possible that those that are seeking to keep child sacrifice legal in America are seeking some supernatural help from demonic entities?

Is that the real reason why this monument is being erected at this time?

By putting this arch up in the most powerful city on the planet, many believe that the other side is laying out a welcome mat for the Antichrist to come and dwell among us.

We live in a very strange world, and it is getting stranger with each passing day…