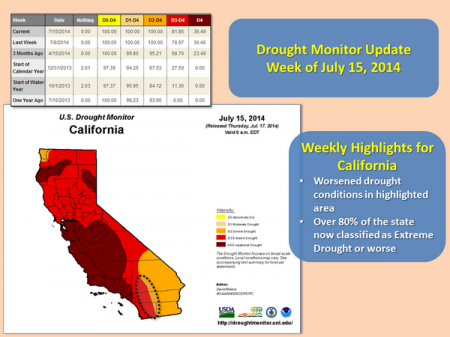 More than 80% of California is now in an extreme drought, according to new data by the National Weather Service.

The NWS’ Drought Monitor Update for July 15 shows 81% of California in the category of extreme drought or worse, up from 78%. Three months ago, it was 68%.

The new data comes as officials are getting tough on water wasters.

Saying that it was time to increase conservation in the midst of one of the worst droughts in decades, the State Water Resources Control Board adopted drought regulations that give local agencies the authority to fine those who waste water up to $500 a day.