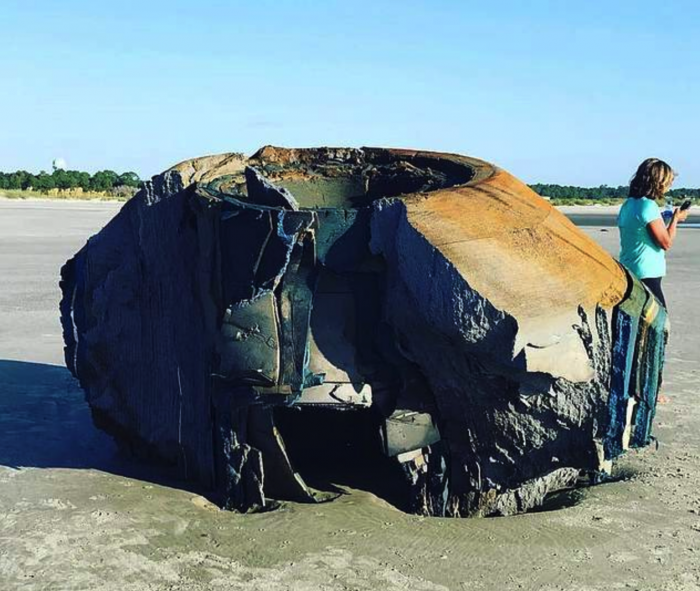 What in the world is this thing? Just a few days ago, an extremely large mystery object washed ashore on Seabrook Island, and nobody can explain what it is or where it originated from. Officials from the city of Charleston quickly came out to investigate, and they immediately whisked the mysterious object away without offering any sort of explanation. From the photo that we do have, we can tell that it was obviously intelligently designed. The big question is whether it was designed here on Earth or by some extraterrestrial source. And it is obviously a very large object because in the photo it is taller than the adult woman that is standing right next to it.

At first glance, it is easy to assume that the exterior was made out of concrete, but according to multiple media accounts the exterior actually feels “like foam”…

The large cylindrical object, described as being soft and feeling like foam, was found by Lowcountry Marine Mammal Network who are usually deployed to deal with animals struggling on the shoreline.

Could this be some “space junk” from a previous NASA program?

So far, NASA is not saying anything on the matter.

The Lowcountry Marine Mammal Network discovered this object, and they are asking for help in identifying it. Needless to say, lots of theories have been suggested…

The Lowcountry Marine Mammal Network asked for help identifying the object and the Kiawah Conservancy shared the plea on its Facebook page. Dozens of people have responded with guesses ranging from parts of an alien craft to refuse from a “government munition dumping site” in the Atlantic.

“I saw it this morning on my walk,” posted Jennifer Passantino on the Kiawah Conservancy Facebook page. “I assume it was a buoy, but could also be the remains of an alien spaceship.”

The most popular assumption is that the object is part of a NASA rocket, shuttle or “re-entry capsule.”

Do you think that you can identify the origin of this object?