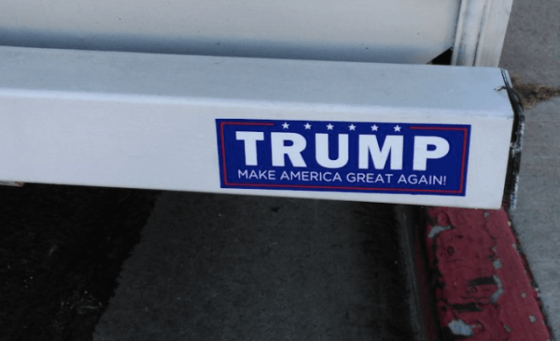 (SHTFPlan.com) Another day, another story about an enraged and offended liberal snowflake getting violent because a bumper sticker hurt their feelings.  A Massachusetts woman actually rammed a vehicle because it had a Trump bumper sticker affixed to it.

The woman has been taken into custody for intentionally damaging private property after being unable to control her emotions. According to Fox News, Chloe Wright, who is 25 years old, was arrested for an alleged hit-and-run in Hyannis on June 30, the Cape Cod Times reported, citing a police report.

To “celebrate” this epic and a little terrifying meltdown, we’ve included a rather funny video of other liberals melting down.  There are a few curse words in the following video and it may not be appropriate for those at work.

The man whose vehicle Wright reportedly rammed with her car contacted the Barnstable Police Department. H said he recalled hearing a motorist behind him honking their car horn as he waited at a red light. According to the police report, the honking continued and by the time he reached another red light, the motorist started shouting at him, the Times reported.

Because the victim thought the angry and repetitive honking and shouting were due to a problem or possible damage to his vehicle, the man reportedly got out of his car. He said at that time, he heard the other motorist screaming about his bumper sticker-which indicated he was in support of president Donald Trump, according to the report.

“She said, ‘You voted for Trump?’” the man recalled her saying. “I said yes. She called me a racist and several other names.”

The man then claimed that the woman repositioned her vehicle and hit his car with hers, the Times said, citing the police report. After this, the woman reportedly left the scene.

“She bent my door and I had to lean back to avoid getting hit,” the man reportedly said. “She also hit the side of my car.” –Fox News

The man’s girlfriend, who was with him at the time, backed up his description of the alleged incident, the police report said, according to the Times. Wright was arrested roughly a month later on a warrant from the Barnstable district court for assault with a dangerous weapon, state police confirmed to Fox News.  She reportedly pleaded not guilty during a court appearance on Monday and was freed on a $1,250 bond. The Times reported that she was also charged with vandalizing property and leaving the scene of property damage.