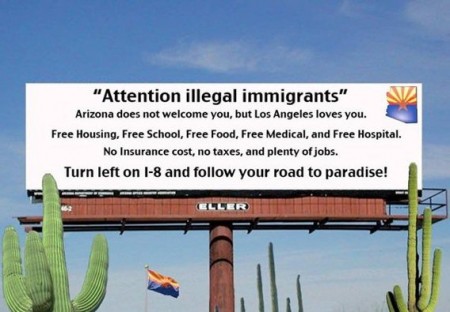 In recent weeks tens of thousands of illegal immigrants have flooded the southern border of the United States. So much so that border patrol agents are overwhelmed to the point where security along the Rio Grande river has become virtually non-existent. Instead of making arrests, detaining and deporting those who cross into America illegally, many immigration agents are reportedly mixing baby food and changing diapers for children left displaced by parents who’ve abandoned them in the hopes their kids would find greener pastures in the U.S.

The inaction on the part of the Federal government has left many bewildered. Some insiders at Immigration and Customs Enforcement (ICE) have even gone so far as to suggest that the entire situation has been orchestrated by the Obama administration in an effort to increase their voter base ahead of the upcoming national elections this year and in 2016. That allegation may have seemed ridiculous to supporters of amnesty legislation and immigration reform, who argue that allowing immigrants into America is a humanitarian issue.

But a new legislative proposal from Democratic Senator Guestavo Rivera of New York may have just proven that opponents of lax border policies have a legitimate concern as it relates to diluting the Conservative and Libertarian voter block, as well as the burden of more government spending to accommodate the influx of people requiring assistance.