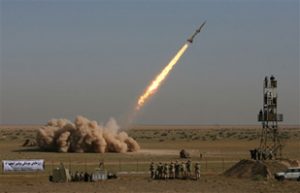 Iran has announced that it has successfully test-fired the longest-range missiles in its arsenal – a weapon capable of carrying a warhead and striking Israel, U.S. military bases in the Middle East, and parts of Europe.

U.S. Defense Secretary Robert Gates is very clear about what he thinks about Iran’s intentions: “The Iranians have the intention of having nuclear weapons”.

Has the U.S. known about Iran’s secret nuclear plant for years?

The U.S. is threatening to dramatically escalate military operations inside Pakistan.

Some mainstream media outlets are declaring that the second wave of the swine flu pandemic is starting to be felt around the United States.

In Austin, Texas so many parents have been rushing their children to the Dell Children’s Medical Center of Central Texas with swine flu symptoms that the hospital had to set up tents in the parking lot to cope with the overwhelming numbers.

Mainstream media outlets are warning that when swine flu vaccinations begin, some people will drop dead of heart attacks or strokes, some children will have seizures and some pregnant women will miscarry – but none of that will be the fault of the swine flu vaccine.

A 14 year old girl in the U.K. recently died and three of her classmates became seriously ill after taking a cervical cancer vaccine.

Under new rules, all dogs in the U.K. will be forced to be implanted with microchips which contain their owner’s details.

Aren’t you glad that you don’t live in the U.K.?  Some local governments there are actually hiring spies to rummage through garbage cans to see what is being thrown away.

Provocateur cops caught disguised as “anarchists” were publicly exposed at the G20 summit in Pittsburgh.

Lawmakers in the U.S. House of Representatives continue to push for legislation that would subject the Federal Reserve to a sweeping congressional audit.

Has Saudi Arabia given permission for Israeli fighter jets to fly through their air space to launch air strikes on Iranian nuclear installations?

Barack Obama says that American kids spend too little time in school, so he is proposing a shorter summer vacation for kids.

Is the fall of the dollar being openly predicted on CNBC?

The drought in Kenya is reaching nightmare proportions.

Is there new evidence that Adolf Hitler did not die in his bunker as we were previously told?

A stunning “morphing” UFO was recently photographed at close range in Ontario, Canada.

Lastly, ancient coins have been discovered in Egypt that have the name of the ancient Biblical patriarch Joseph on them.