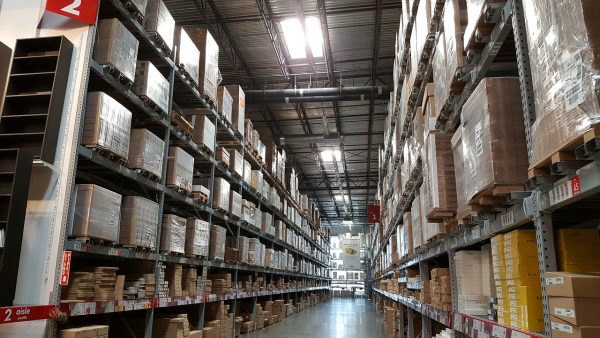 When economic conditions initially begin to slow down, businesses continue to order goods like they normally would but those goods don’t sell as quickly as they previously did. As a result, inventory levels begin to rise, and that is precisely what is happening right now. In fact, the U.S. inventory to sales ratio has risen sharply for five months in a row. This is mirroring the pattern that we witnessed just prior to the financial crisis of 2008, and it is exactly what we would expect to see if a new recession was now beginning. In recent weeks, I have been sharing number after number that indicates that a serious economic slowdown is upon us, and many believe that what is coming will eventually be even worse than what we experienced in 2008.

And even though I write about this stuff every day, I was stunned by how rapidly inventory levels have been rising recently. The following numbers come from Peter Schiff’s website…

This comes on the heels of the largest gain in wholesale inventories in more than five years in December.

Inventories rose 7.7% from a year ago in January. Meanwhile, sales only rose by 2.7%. Overall, total inventories were $669.9 billion at the end of January, up 1.2% from the revised December level.

Businesses don’t like to have excess inventory, because carrying excess inventory is expensive and cuts into profits. So they try very hard to manage their inventories efficiently, but if the economy slows down unexpectedly that can catch them off guard…

There are few indications of economic slowing that are more convincing than an unwanted build in inventories — and that apparently is what’s underway in the wholesale sector.

When inventory levels get too high, businesses often start reducing the amount of stuff they are ordering from manufacturers.

So we would expect the numbers to indicate that manufacturing output is down, and that is precisely what we have witnessed over the last couple of months…

U.S. manufacturing output fell for a second straight month in February and factory activity in New York state hit nearly a two-year low this month, offering further evidence of a sharp slowdown in economic growth early in the first quarter.

And wouldn’t you know it, the numbers also tell us that this has been happening too. The following comes from Wolf Richter…

Now it’s the third month in a row, and the red flag is getting more visible and a little harder to ignore about the goods-based economy: Freight shipment volume in the US across all modes of transportation – truck, rail, air, and barge – in February fell 2.1% from February a year ago, according to the Cass Freight Index, released today. The three months in a row of year-over-year declines are the first such declines since the transportation recession of 2015 and 2016.

So there you have it. Anyone that tries to tell you that the U.S. economy is “booming” is simply not being accurate.

And when you throw in the fact that we just witnessed one of the worst disasters for U.S. agriculture in all of U.S. history, it is easy to understand why the economic outlook for the remainder of 2019 is rather bleak. One agribusiness company just announced that it will have “a negative pretax operating profit impact of $50 million to $60 million for the first quarter” as a result of all the flooding…

Already suffering from low crop prices and the U.S.-China trade war, Mother Nature has delivered yet another blow to the beleaguered American farmer. Growers in the heartland this year have seen arctic cold blasts, been blanketed by snow and just in the last week were inundated by floods. Archer-Daniels-Midland Co., one of the world’s biggest agribusinesses, said Monday that it expects weather disruptions to have a negative pretax operating profit impact of $50 million to $60 million for the first quarter.

Korth said he fears the worst for local farmers, citing a friend who lost 85 cows to flooding and another who sells seeds and has already seen order cancellations.

“It’s going to put a lot of people out of business,” Korth said. “It’s just a terrible deal.”

Unfortunately, the flooding in the middle portion of the country is just getting started. According to the National Weather Service, we are going to see more catastrophic flooding for the next two months.

As you can see, the elements for a “perfect storm” are definitely coming together, and I encourage everyone to get prepared for rough times ahead.

But many people are not that concerned about a new crisis, because they remember that global central banks were able to pull us out of the fire last time around.

Unfortunately, they may not be able to do it this time. Just consider the words of the deputy director of the IMF…

Major financial institutions may be powerless to prevent the next global economic downturn from tuning into a full-blow recession, the International Monetary Fund has warned.

In a speech on the future of the eurozone, the IMF’s deputy director David Lipton, warned of the depleted power of central banks and governments to combat another sharp economic shock.

“The bottom line is this: the tools used to confront the global financial crisis may not be available or may not be as potent next time” he said.

But I am sure that global central banks will try to patch the system back together again, and at certain moments it may even look like they are having some success.

In the end, however, they will not be able to stop the “Bubble To End All Bubbles” from completely bursting.

It has taken decades of exceedingly foolish decisions to get us to this point, and there is simply no way that we can avoid the day of reckoning that is coming.