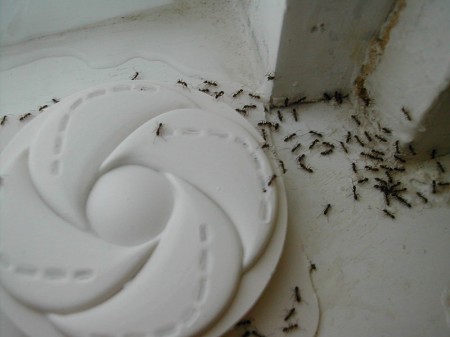 Argentine ants, Linepithema humile, are on the march in drought-stricken California, and they’re invading Bay Area homes in droves. It’s considered one of the most invasive species on the planet.

“The Argentine ant is a species introduced to our environment – and it has invaded our ant fauna,” said Brian Fisher, curator of entomology at the California Academy of Sciences in San Francisco. “They do bite from time to time and if they move into your house, they will attempt to defend their home – and you’re considered a threat.

And, it’s not easy to get rid of them. The ants in our homes across the state are part of a single super colony that extends from Oregon to Mexico, Fisher says. Furthermore, you can have the cleanest house on the block and still find an ant invasion because they’re largely driven by weather.

With groundwater and green vegetation in short supply, the Argentine army is entering Bay Area homes through minuscule spaces in walls and floors. They are entering through plumbing pipes – just about any small portal imaginable.