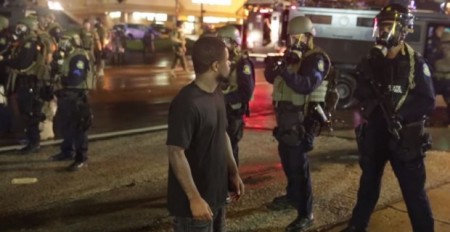 The Nation of Islam and the New Black Panthers are behind the scenes directing the protests in Ferguson, Missouri according to Malik Zulu Shabazz, the head of Black Lawyers for Justice.

“As you well know, on Thursday night, my group — and thanks to you — my organizers, along with the New Black Panther Party and the Nation of Islam, we are the ones who put those men in the streets and we controlled the flow of traffic,” Shabazz said during a news conference on Saturday.

Ron Johnson, the captain of the Missouri Highway Patrol, agreed with the statement made by Shabazz.

Shabazz said the curfew enforced by the police represents a “prescription for confrontation.”

Violence erupted on Sunday night ahead of the curfew. Demonstrators threw Molotov cocktails at police, looted stores and carried out a “coordinated attempt” to block roads and overrun the police’s command center, according to Missouri Gov. Jay Nixon, who characterized the acts as “pre-planned.”

In response, Nixon ordered the National Guard into the area.