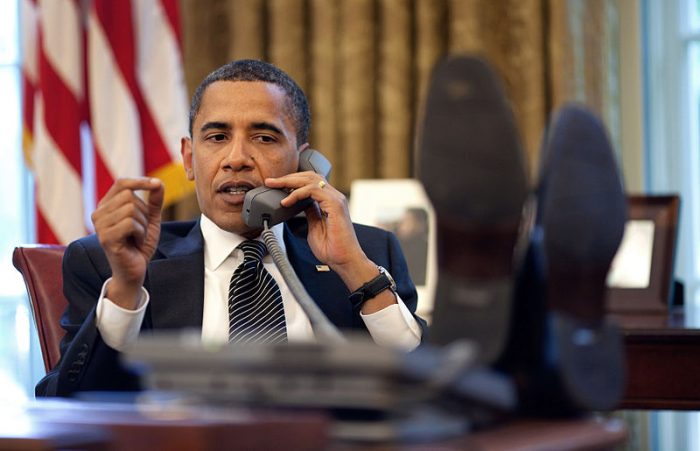 Seeing as how the deep state, which includes the NSA and FBI, appear to be leaking all of Trump’s private phone calls with foreign leaders and took down General Michael Flynn by spying on his calls and leaking them to their friends in The Washington Post and The New York Times, the story is being looked at in a completely new light.

As the The New York Times reported on January 12th:

In its final days, the Obama administration has expanded the power of the National Security Agency to share globally intercepted personal communications with the government’s 16 other intelligence agencies before applying privacy protections.

The new rules significantly relax longstanding limits on what the N.S.A. may do with the information gathered by its most powerful surveillance operations, which are largely unregulated by American wiretapping laws. These include collecting satellite transmissions, phone calls and emails that cross network switches abroad, and messages between people abroad that cross domestic network switches. Trump questioned whether the NSA and FBI were behind a multitude of leaks handed to the New York Times and Washington Post.

Attorney General Loretta E. Lynch signed the new rules, permitting the N.S.A. to disseminate “raw signals intelligence information,” on Jan. 3, after the director of national intelligence, James R. Clapper Jr., signed them on Dec. 15, according to a 23-page, largely declassified copy of the procedures.

These are Obama loyalists who reports suggest may have worked to sabotage Trump by ousting Flynn in order to preserve Obama’s Iran deal.

Previously, the N.S.A. filtered information before sharing intercepted communications with another agency, like the C.I.A. or the intelligence branches of the F.B.I. and the Drug Enforcement Administration. The N.S.A.’s analysts passed on only information they deemed pertinent, screening out the identities of innocent people and irrelevant personal information.

Now, other intelligence agencies will be able to search directly through raw repositories of communications intercepted by the N.S.A. and then apply such rules for “minimizing” privacy intrusions.

“This is not expanding the substantive ability of law enforcement to get access to signals intelligence,” said Robert S. Litt, the general counsel to Mr. Clapper. “It is simply widening the aperture for a larger number of analysts, who will be bound by the existing rules.”

But Patrick Toomey, a lawyer for the American Civil Liberties Union, called the move an erosion of rules intended to protect the privacy of Americans when their messages are caught by the N.S.A.’s powerful global collection methods. He noted that domestic internet data was often routed or stored abroad, where it may get vacuumed up without court oversight.

“Rather than dramatically expanding government access to so much personal data, we need much stronger rules to protect the privacy of Americans,” Mr. Toomey said. “Seventeen different government agencies shouldn’t be rooting through Americans’ emails with family members, friends and colleagues, all without ever obtaining a warrant.”

Is this what happened to Flynn? Is this why Trump’s calls with foreign leaders are being illegally leaked to the press in order to sabotage his presidency? It sure as hell looks like that’s the case.

Remember, the point at which Donald Trump broke away from the pack and secured his victory during the primaries was when the Colorado GOP decided to deny Americans their right to vote and handed Ted Cruz all the state’s delegates, then tweeted: “We did it. #NeverTrump.” A very similar story is now happening with the deep state’s open sabotage. Even though Americans came out in droves to elect a populist leader promising massive change, the deep state is sabotaging his presidency to prevent him from implementing the agenda his supporters voted for.