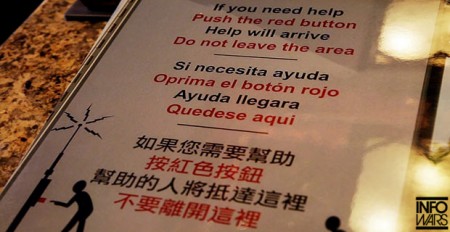 The Border Patrol is increasingly posting signs written in Chinese near the U.S./Mexico border, which underscores the booming human smuggling trade as illegal aliens from China flood into America.

Case in point, the emergency beacons placed in desolate border regions which allow stranded illegals to request help from the Border Patrol have instructions in English, Spanish and Chinese, but back in 2001 when they were first deployed, the instructions were written only in English and Spanish.

Since then, human smuggling has exploded into a billion dollar institution, with people of various nationalities paying smugglers, known as coyotes, thousands of dollars to be transported illegally into the United States.

“The Chinese are paying $50,000, the Indians are paying $10,000 to $20,000, [for] all the Central Americans the average is about $7,000 and the Mexicans are, especially [from] southern Mexico, are paying $3,000, so it’s a huge, huge money event for the cartels, probably even more lucrative than the drug business,” Dr. Michael Vickers of the Texas Border Volunteers told Infowars.