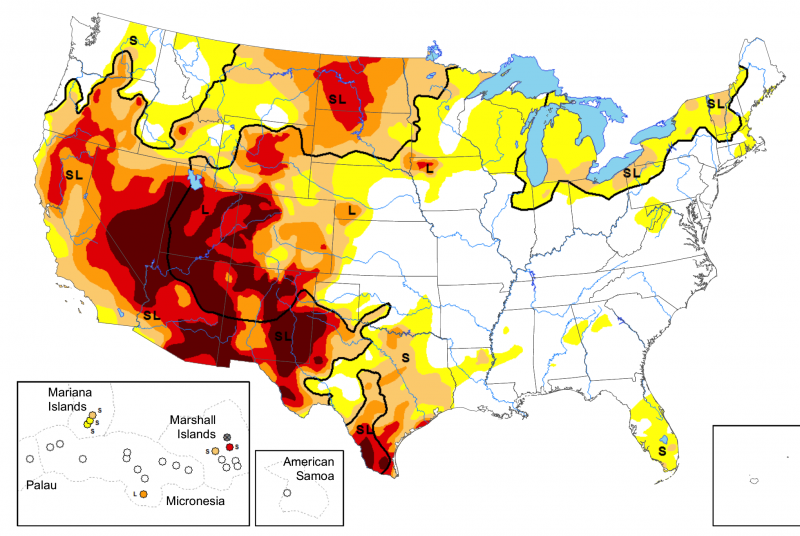 Scientists have begun using the term “megadrought” to describe the multi-year drought that has been plaguing the western half of the country, and now we are being told that it looks like 2021 will be the worst year of this “megadrought” so far by a wide margin.  That is extremely troubling news, because major water reservoirs have already dropped to dangerously low levels, some farmers have been told that they will not be allowed to use any water at all this year, and the dust storms in the western U.S. are becoming so large that they can actually be seen from space.  This is a major national crisis, and it is only going to get worse.

As you can see from the latest U.S. Drought Monitor map, nearly the entire western half of the nation is experiencing some level of drought at this moment.

As conditions just get drier and drier, many farmers have become deeply concerned about what that will mean for growing season in 2021.

New Mexico is right in the heart of “the second Dust Bowl”, and chile farmer Glen Duggins is bracing for a very difficult year…

The Rio Grande is expected to be in extreme drought this year, creating tough conditions for local farmers and putting New Mexico‘s beloved chile in danger. “It’s gonna be a tough year because we are out of water,” said Glen Duggins, a chile farmer out in Socorro County.

When he says that they are “out of water”, he is not exaggerating.

It is only early April, and the largest reservoir in the entire state “stands at less than 11% capacity”…

Along the Rio Grande, New Mexico’s largest reservoir stands at less than 11% capacity, meaning the irrigation season for farmers in the southern part of the state will likely start late and include only small allotments.

Farther north, managers with the Middle Rio Grande Conservancy District are in a position not seen in decades. There’s no extra water in the reservoirs, and interstate water-sharing agreements are restricting storage and releases from upstream reservoirs because New Mexico has fallen short of what it owes Texas.

Other prominent reservoirs are already dangerously low as well.

In fact, it is being projected that Lake Mead and Lake Powell are both headed for record lows…

The country’s two largest reservoirs are both headed for record lows. The last time Lake Mead reached a record low level was in 2016. The latest projections from the federal Bureau of Reclamation show Mead could fall below that mark as soon as July. Lake Powell is now just 36% full, and estimates show it could decline to a record low around March 2022.

Officials are telling us that they are doing everything that they can to conserve water, but if current trends continue it is just a matter of time before draconian restrictions start to be instituted.

Further west, the state of California also appears to be heading toward a major water crisis…

On Thursday, the unofficial end of California’s wet season, officials announced that the accumulation of snow in the Sierra Nevada mountains and the Cascades was about 40% below average levels. The state doesn’t have enough snow and rain banked to replenish its groundwater supplies, feed its rivers and streams or fill depleted reservoirs.

“It’s not just that we’re anticipating a dry year, it’s that this is our second extremely dry year, in a row,” said Daniel Swain, a climate scientist at the University of California Los Angeles and the Nature Conservancy. California – along with much of the US west – is parched, Swain added, and should brace for water cuts and arid conditions that could trigger more destructive wildfires.

We have seen droughts in California before, but this one is shaping up to be really, really bad.

At this point, we are being told that “agricultural customers south of California’s delta” will not be allowed to receive any water at all this year…

Already, the California department of water resources has announced major cuts to the reservoirs and aqueducts that supply farms and cities. The Federal Bureau of Reclamation, which delivers water to farms up and down the state’s Central Valley, said agricultural customers south of California’s delta, which feeds into the San Francisco Bay, will not be getting any water this year. And some localities, including Marin county, north of the San Francisco Bay, have asked residents to voluntarily cut back on their water use.

If you are a farmer, how are you supposed to operate a farm if you are not allowed to have any water?

Remember, this is just early April.

As temperatures rise and conditions get even drier, things will only get even crazier during the summer months.

I have been warning about the return of dust bowl conditions for a very long time, and at first a lot of people didn’t take me seriously.

But now things are so bad that nobody can ignore what is taking place.

When people think back to the original Dust Bowl, what comes to mind more than anything else are the giant dust storms that would race across the middle of the country.

Well, it is starting to happen again, and some of the dust storms are so big that they can actually be seen from space…

A line of strong storms kicked up an enormous amount of dust in eastern New Mexico and West Texas Monday afternoon. So much so, it could be seen from satellite.

A Dust Storm Warning was issued for Lubbock and the surrounding counties Monday evening due to damaging wind gusts in excess of 60+ mph and near-zero visibility due to blowing dust.

The days of “the second Dust Bowl” are here, and they are going to be quite bitter.

Yes, our technology may be a lot more advanced now, but we remain exceedingly dependent on our water resources.

Those resources are going to continue to dwindle in the western half of the country, and that is going to force some extremely difficult decisions to be made in the months and years ahead.