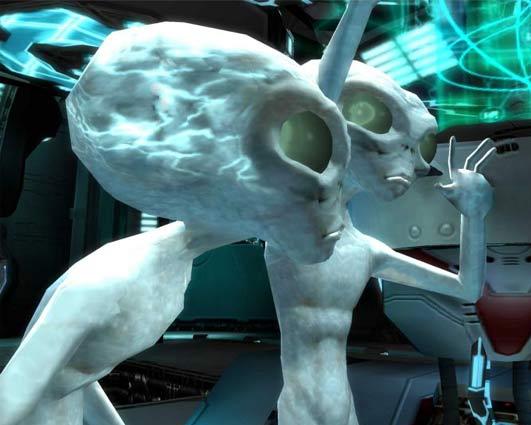 At Scientific American, Clara Moskowitz has the transcript from a recent interview with Weintraub, in which they discuss the implications of extraterrestrial life on humanity’s assorted religious sensibilities. Here’s Weintraub on the difficulties that could be faced by religions that see humans as “the sole focus of God’s attention”:

The religions that see the world through that viewpoint tend to be some of the Christian evangelicals. The Eastern Orthodox Church, a branch of Catholicism, also has that view.

There are some people who claim that if God had created extraterrestrials, then there clearly would be words in the Old and New testaments, which we would have already found, that would have said explicitly that God created extraterrestrials—and since those words don’t exist, there can’t be. Well, there’s nothing in the Old and New testaments that talks about telephones either, and telephones do seem to exist.

As for which religions would accept the existence of alien life most readily, Weintraub points to the expansive cosmological scope of Buddhism as an indication that practitioners of that belief system “wouldn’t be surprised to find life existing in other places.” Mormonism, too, he says, is “pretty interesting”:

There is a clear belief in Mormonism in extraterrestrial life. All Mormons have as a goal to become exalted, to become a god. To become a god you effectively get your own planet with your own creatures on it and you’ll take good care of them. The only place in the universe where you have the opportunity to become exalted is Earth. Those Mormons that receive the highest level of exaltation will be equals with God and have their own worlds, occupied with living beings seeking their own salvation and immortality. The prophet Joseph Smith taught that these worlds are or will be inhabited by sentient beings. It is everywhere taken for granted. They’re not vague at all. There’s no doubt that the Mormons are comfortable about the idea that there are others on other worlds. They’d be unhappy if we didn’t find anybody. But they’d just say we haven’t looked hard enough.

The interview is definitely worth reading in its entirety (for the section on whether Jesus saved the Klingons as well as humanity, alone), so check it out over at SciAm.

1 thought on “Which Religions Would Have The Hardest Time Accepting Alien Life?”