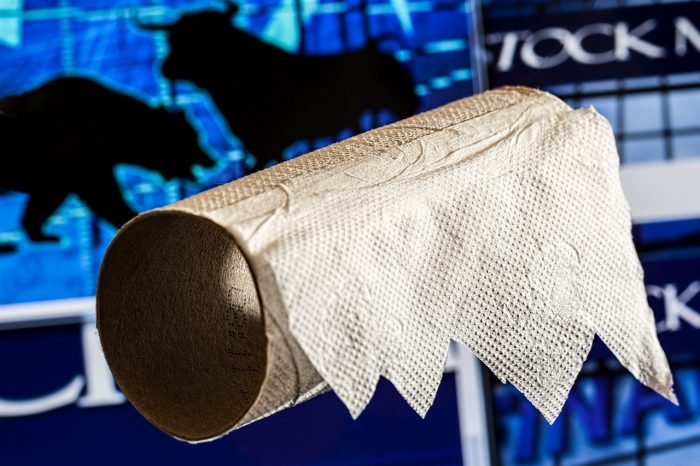 We have not seen anything like this since the financial crisis of 2008. On Thursday the Dow Jones Industrial Average lost another 464 points, and over the last five trading sessions it has lost a total of more than 1,700 points. CNN’s Fear & Greed index has swung all the way over to “extreme fear”, and there has only been one December in all of U.S. history that was worse for the stock market than this one. But back at the very beginning of October, most of the experts never would have imagined that the year would end this way. According to CNBC, the Dow Jones Industrial Average hit an all-time record high of 26,951.81 in early October, and investors were feeling really good about things at that point. But on Thursday the index closed at just 22,859.60, and that means that the Dow has lost more than 4,000 points in less than three months.

All of the major trend lines have been shattered and all of the key support levels have been breached. When analysts look at stock charts these days, all they are seeing is sell signal after sell signal. One investment strategist told CNN that stocks are “quickly approaching the capitulation phase”…

According to Google, “capitulation” means “the action of surrendering or ceasing to resist an opponent or demand.” In this case, the bulls are on the verge of surrendering to the bears, and if that happens we could see a tremendous amount of chaos break loose on Wall Street.

Many are pointing the blame for what is happening at the Federal Reserve. Here is just one example…

“We, too, were very vocal in recommending heavily that the Fed not hike yesterday,” said Julian Emanuel, chief equity strategist at BTIG.

“This is all about the speed of things,” Emanuel added. “The problem with ignoring the consequences of the balance sheet reduction really tells you that the Fed is not paying attention to that fact that financial markets correct much more rapidly on the downside than they do in bull markets to the upside.”

Even though the U.S. economy is slowing down substantially, and even though financial markets have already been crumbling, the Federal Reserve raised interest rates anyway.

And they knew that the financial markets would respond very negatively, so nothing that has happened the last couple of days is any sort of a surprise.

Of course it isn’t just stocks that are plunging. Junk bonds just had their worst day since the Brexit vote, and that is an extremely ominous sign. The following comes from Zero Hedge…

High yield bond prices are collapsing, but it is clear that liquidity has evaporated as traders have sent high yield bond ETFs (more liquid) dramatically below its fair-value as they seek hedges ahead of their liquidation needs.

Today is HYG’s worst day since Brexit, with price crashing to lowest since April 2016…

As I have discussed before, the collapse of junk bonds was an early sign that stocks were going to totally crash in 2008, and now we see a very similar pattern playing out in 2018.

One of the signature moments from the crisis of 2008 was Jim Cramer’s famous rant about the Federal Reserve on CNBC, and he referenced that rant during remarks that he made on Thursday…

For CNBC’s Jim Cramer , the worst part about the Federal Reserve’s latest interest rate hike is that the central bank’s chief, Jerome Powell, seemed to ignore what Cramer regards as “serious” weakness in the U.S. economy.

“I have a better read on the economy than the Fed and I know they’re not going to listen to me,” the “Mad Money” host said Thursday as the Dow Jones Industrial Average fell to a 14-month low . “I feel powerless, just like 2007 , when I ranted that the Fed needed to start easing aggressively in order to stave off a financial catastrophe.”

Does Jim Cramer really believe that he has a better grasp on how the U.S. economy is performing than the Federal Reserve does?

That is quite a bold statement, but based on what the Fed has been doing lately it is tempting to think that they are utterly clueless at this point.

But of course they aren’t clueless. They know exactly what they are doing, and it isn’t about helping the American people.

Meanwhile, just like we saw in 2008, the mainstream media is trying to assure everybody that they should keep their money in the stock market. In fact, CNN posted an article earlier today that encouraged people to put more money in because this latest downturn is a “buying opportunity”…

“The market’s behaving like a two-year-old,” said David Kelly, chief global strategist at JPMorgan Funds. “The Federal Reserve is doing its job — and it’s doing it patiently and cautiously.”

Kelly said the recent market slide could present an entry point, especially for investors who previously felt stocks were too expensive.

You can believe that if you want, but there is a reason why corporate insiders were selling stocks at the fastest pace in 10 years just before the market started to crash.

This ridiculously absurd stock market bubble was not going to last forever, and now it is imploding at a speed that is absolutely breathtaking.

Hopefully things will stabilize a bit as we roll through the holidays, but there is no guarantee that will happen.