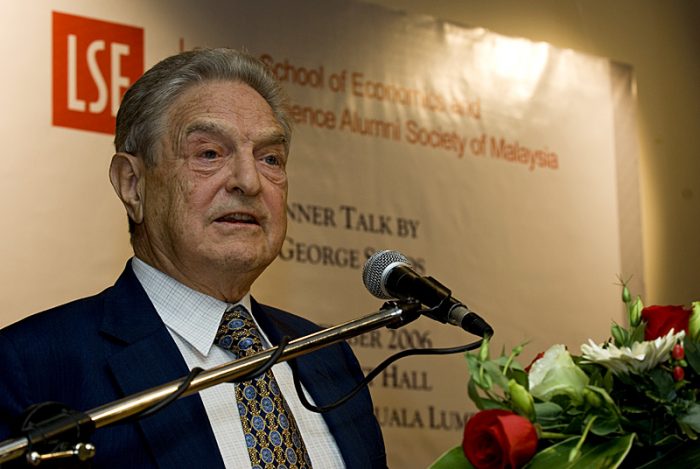 George Soros avoided a loss of more than 17 million dollars by dumping shares of Facebook, Netflix and Goldman Sachs just before the big crash started happening. In other words, he made out like a bandit by selling at the peak of the market. Is he smarter than all the rest of us, did he have some inside information, or was he simply lucky? In recent months, tech stocks have lost approximately a trillion dollars in value, and many investors have been absolutely devastated. But not George Soros. According to the most recent filing with the SEC, Soros Fund Management was able to dump shares in Facebook and Netflix just in time…

Soros Fund Management, which Soros founded and chairs, exited social-network giant Facebook (FB) completely in the third quarter, while also slashing positions in Netflix stock (NFLX) and Goldman Sachs Group stock (GS). Those three stocks have tumbled in the fourth quarter so far, with Facebook and Goldman setting new lows Tuesday. They are down almost 20% and 15%, respectively, so far this quarter. Highflying streaming-content giant Netflix has tumbled almost 29% since the end of September.

Soros saved a chunk of cash by selling: Barron’s estimates that, had he maintained positions in those stocks, he would have unrealized losses of about $17.7 million so far in the fourth quarter.

Perhaps we will never know what prompted those moves, but with George Soros these strange “coincidences” have happened again and again throughout his career.

Unfortunately, the top executives at the major tech companies were not as prescient, and so some of them have literally lost billions of dollars…

Amazon CEO Jeff Bezos has lost a stunning $42 billion since early September, according to the Bloomberg Billionaires Index, as the e-commerce giant’s stock has dropped more than 25 percent.

Embattled Facebook CEO Mark Zuckerberg has also taken a beating as reports indicate he’s lost some $34 billion since late July and is now worth $52 billion – ranking as the seventh-richest person in the world.

Google chiefs Larry Page and Sergey Brin have lost a combined $20 billion from their peak wealth in July as the search engine’s stock has dropped 20 percent and closed in a bear market on Monday for the first time since 2011.

Could you imagine losing 42 billion dollars?

The atmosphere on Wall Street has completely shifted over the last couple of months. Not too long ago those of us that were calling for a bear market were being mocked, but nobody is mocking anymore.

One of the big things that has been propping up the stock market in recent years has been corporate buybacks. In fact, I wrote a major article about this not too long ago that you can find right here. Big corporations have literally been spending hundreds of billions of dollars to prop up their own stock prices, and many of these corporations have been going into tremendous amounts of debt in order to do this.

For a long time General Electric was one of the biggest offenders. They borrowed billions upon billions of dollars for stock repurchases, and it worked for a while. But now GE shares have been absolutely tanking, and they can’t keep the game going anymore because they are drowning in about 100 billion dollars of debt. The following comes from an excellent Marketwatch article…

GE was one of Wall Street’s major share buyback operators between 2015 and 2017; it repurchased $40 billion of shares at prices between $20 and $32. The share price is now $8.60, so the company has liquidated between $23 billion and $29 billion of its shareholders’ money on this utterly futile activity alone. Since the highest net income recorded by the company during those years was $8.8 billion in 2016, with 2015 and 2017 recording a loss, it has managed to lose more on its share repurchases during those three years than it made in operations, by a substantial margin.

Even more important, GE has now left itself with minus $48 billion in tangible net worth at Sept. 30, with actual genuine tangible debt of close to $100 billion. As the new CEO Larry Culp told CNBC last Monday: “We have no higher priority right now than bringing those leverage levels down.”

GE was once one of the greatest corporations on the entire planet, but now they stand on the precipice of collapse because they were addicted to borrowing money for stock buybacks.

Of course GE is far from alone. Other corporations that have gone into serious amounts of debt in order to fund share repurchases are also now paying a very great price for doing so. Ultimately, it was a giant Ponzi scheme of epic proportions, but now the game is collapsing.

In my first novel, there is a stock market collapse that begins in the fall, and things begin to deteriorate very rapidly in this country thereafter. Unfortunately, we are starting to watch a very similar scenario play out right in front of our eyes. In recent years a booming stock market has been a big point of pride for a lot of Americans, but now that bubble is bursting.

For many people, money is more important than anything else in life. In fact, a recent survey discovered that Americans find more meaning and purpose in life from “career” and “money” than they do from “faith”.

But when “the god of money” fails, how are most Americans going to respond?

I do not believe that the United States is going to handle another economic meltdown very well. We are already a deeply angry and divided nation, but at least our debt-fueled “prosperity” has kept things relatively calm.

If that “prosperity” completely disappears, we are going to have a complete and utter national nightmare on our hands.