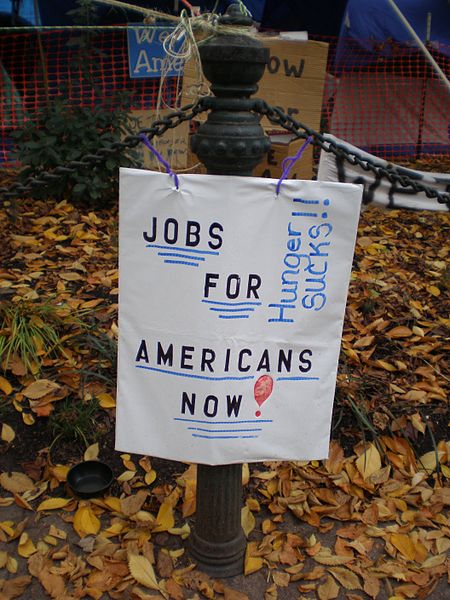 The Total Number of Americans Not in the Labor Force is over 92 million~  about 1/3 of the population.

The latest official government statistics put the unemployment rate in the U.S. at 6.2%, according to BS.gov – I’m sorry, BLS.gov (The Bureau of Labor and Statistics). Not bad, and it’s even declining, according to them.

What is most surprising is that most of the jump in the last 10 years occurred once the recession was labeled as being officially over.

The unemployment rate is looking much better than it should because  in the last 10 years 16.2 million Americans have dropped out of the labor force. These people are  not even counted in the official unemployment figures.

The 16 million “drop outs” have increased at twice the rate of population growth, indicating a 50% increase in this phenomenon in the past 10 years. They have given up looking, and are discouraged workers, or more aptly “discouraged non-workers.” You can’t blame them. Spending hours filling out lengthy on-line applications to no avail, going to interview after interview and never getting a call back can be discouraging. In fact, I have never heard of people giving up looking for a job in my lifetime, until now.

Many times there are dozens of people waiting in the same room to apply for one job. These are unemployable types, but people with college degrees trying to land a simple receptionist or administrative job. Credentials and experience don’t even matter any more. Americans are forced by market conditions to get by on less, make ends meet and suffer a decreased standard of living.

The Real Unemployment Rate is Almost 25%

Trends in the labor market continue to be:

The US population has grown by 8 percent since 2004 from 292 million to 318 million. Those not in the labor force has grown by 17 percent in this same period. Some of this can be accounted for by aging baby boomers but most nearing retirement have little to no money to their name, so the new retirement plan is no retirement. Many will be working until they drop.

You can see that most of the growth has come after the recession officially ended. This is coming at a time when our top 10 employment fields are largely in the low wage category:

Which begs the question, why would we want more low-skilled illegal immigrants taking the only jobs that we literally have left?

The Average Workweek is Under 35 Hours

Keeping hours low is a big plus in terms of avoiding benefits to workers. The Obamacare mandate of employers having to purchase health insurance if they have 50 or more full-time employees is definitely prohibitive for companies wanting to grow their employee base as well as providing full-time work hours.

The average work week is less than 35 hours

The trend to lower wage labor and a large not in the labor force category has led to a dwindling middle class. The trend is rather clear. All we need to do is look at household income adjusted for inflation:

16 Million Americans not in the labor force
( over the past 10 years) is twice the rate of population growth, indicating there is something very wrong

When wages fall behind because of the power of inflation, you ultimately end up with a diminishing standard of living. Your dollar is simply unable to purchase what it used to. The fact that we have added 16.2 million Americans to the “not in the labor force” category over the last 10 years is astounding.

And all the income growth has been going to the top 10% of the population, a disparity not seen for at least half a century. No doubt some of the earning attributable to gains in the stock market, which does little good to middle class Americans, most of who don’t even own one stock.

Why You Can’t Believe Government Statistics

The following chart are the latest figures from the Bureau of Economic Analysis:

Explanation of the figures on the above chart:

As you can see, the government numbers are manipulated in such a way that the real situation with employment is not shown. It’s common for people to basically only know the employment situations for themselves and their friends and families. When they see the government statistics, they think, well, my situation is bad, but apparently not so for everyone else.

The government and the media exploits our thinking, by making us think we are the only ones experiencing life that is contrary to their statistics. This is government propaganda, as old as the hills. But hard for Americans to swallow, as America was founded on morality and truthfulness, and we used to be able to trust in our government and president to tell us the truth, no matter how painful it was.

Not any more. Lies and deceit are dominating this entire administration. America is in the midst of a long-term economic decline, but the mainstream media and most of our politicians seem to think that things are better and that we are in a recovery.

The truth now has to be gained from non-mainstream websites like this. Nothing the government says anymore is to be trusted. Which makes it kind of easy to understand, once you get it. A good rule of thumb is – whatever the government says, believe the opposite. Like the game kids like to play: It’s Opposite Day.

The government and media today are one big joke. And not a good one, either.