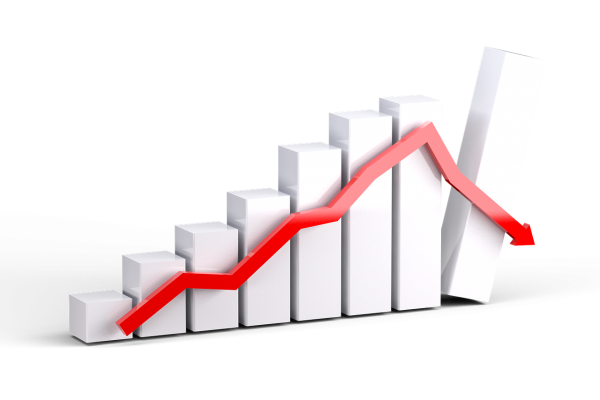 Wall Street responded to our escalating trade war with China by throwing a bit of a temper tantrum. On Monday the Dow Jones Industrial Average was down 617 points, and that was the worst day for the Dow since January 3rd. But things were even worse for the Nasdaq. It had its worst day since December 4th, and overall the Nasdaq is now down 6.3 percent in just the last six trading sessions. Of course it isn’t just in the United States that stocks are declining. Since last Monday, a total of approximately $3.5 trillion in market cap has been wiped out on global stock markets. And since it doesn’t look like we are going to get any sort of a trade deal any time soon, this could potentially be just the beginning of our problems.

China fired a shot that was heard around the world on Monday when they announced that they would be dramatically raising tariffs on U.S. goods…

China will raise tariffs on $60 billion in U.S. goods in retaliation for the U.S. decision to hike duties on Chinese goods, the Chinese Finance Ministry said Monday.

Beijing will increase tariffs on more than 5,000 products to as high as 25%. Duties on some other goods will increase to 20%. Those rates will rise from either 10% or 5% previously.

According to CNBC, these new tariffs are going to be particularly damaging for U.S. farmers…

The duties in large part target U.S. farmers, who largely supported Trump in 2016 but suffered from previous shots in the Trump administration’s trade war with China. The thousands of products include peanuts, sugar, wheat, chicken and turkey.

When you combine the impact of these Chinese tariffs with the unprecedented flooding that we have seen in the middle of the country, the result is that thousands upon thousands of U.S. farmers are going to be pushed into bankruptcy before the end of 2019.

But China might not stop with just increasing tariffs. According to Global Times Editor in Chief Hu Xijin, China “may stop purchasing US agricultural products” entirely, and the Chinese are also examining “the possibility of dumping US Treasuries”…

China may stop purchasing US agricultural products and energy, reduce Boeing orders and restrict US service trade with China. Many Chinese scholars are discussing the possibility of dumping US Treasuries and how to do it specifically.

As I mentioned yesterday, China literally has hundreds of different ways that they can hurt us.

So the truth is that those that are suggesting that the U.S. will not be hurt by this trade war are just being delusional.

In an article that was posted on Monday, CNBC referred to dumping Treasuries as “China’s nuclear option”…

Consider it China’s nuclear option in the trade war with the U.S. — the ability to start dumping its massive pile of Treasury bonds that could trigger a surge in interest rates and substantially damage the American economy.

As the two sides engage in a tit-for-tat tariff exchange, the possibility that China might raise the stakes and stop being the world’s biggest consumer of U.S. debt again reared its imposing head Monday.

The longer this trade war lasts, the angrier the Chinese will become, and the more damage they will inflict upon our economy.

And without a doubt, this trade war could be more than enough to push us into a new recession. On Monday, Michael Wilson of banking giant Morgan Stanley authored this ominous forecast…

“Given other cost pressures and stubbornly low inflation, we are unconvinced that companies will generally be able to fully offset tariff costs through raising prices or through cost efficiencies elsewhere, meaning tariffs will press on margins,” Wilson wrote. “In the case of 25% tariffs on all of China’s exports to the US, we are inclined to think this has the potential to tip the US economy into recession given the cost issues companies are already dealing with.”

Before I end this article, there are two more points that I would like to make. Firstly, the price of soybeans is absolutely tanking right now, and this is going to be absolutely catastrophic for soybean farmers…

With the most recent news of the intensifying tensions between the U.S. and China, the price of soybeans has dropped below $8 a bushel for the first time since 2008, which comes as many Midwest farmers are facing rampant flooding on their land during the planting season.

At this point in the year, around 60 to 70 percent of crops should be planted, John Newton, the chief economist of the Farm Bureau, said. Most expect the USDA to soon announce that, because of flooding and other difficulties, American farmers are only 35 percent planted so far.

I put that last paragraph in bold for a reason. It is the middle of May, and U.S. farmers have only planted about half the crops that they would normally have planted by this time of the year.

That is a national crisis, and it also means that U.S. food production is going to be way down this year.

This is a theme that I have been hammering on over and over again, and hopefully people are getting prepared for much, much higher prices at the grocery store.

Secondly, financial markets got a boost on Monday evening when President Trump indicated that the next “three or four weeks” will determine the success of trade talks with China…

Speaking at a White House event on Monday evening, U.S. President Donald Trump offered a projection about how much longer Washington and Beijing could be locked in heated trade negotiations.

“We’ll let you know in three or four weeks if it’s successful,” he said, according to NBC News.

Trump is expected to meet with the Chinese president some time in June, and the hope that they will be able to work out a deal will probably keep global financial markets from completely tanking in the next few weeks.

Of course there is still likely to be quite a bit of volatility for global stocks in the short-term, but if there is no trade agreement by the end of next month, July could potentially be an absolutely pivotal month for global financial markets.

So stay tuned, because it looks like things could soon be getting very, very interesting…