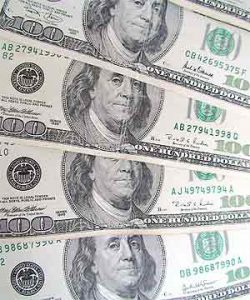 The U.S. government closed its 2009 fiscal year with a record budget deficit of 1.417 trillion dollars, which was 962 billion dollars higher than the previous year.

Why is the U.S. military paying $400 for each gallon of gasoline in Afghanistan?

With the economy in the toilet and millions out of work, Americans are flocking to join the U.S. military.

Seven high-ranking Iranian officers, including at least two generals, were among the 31 people who died in a suicide bombing attack on their meeting in the Sistan-Baluchi provincial town of Pisheen early on Sunday.  Some Iranian officials are blaming Barack Obama for the attack.

Is the Taliban ready to cut a deal with Barack Obama?

Hurricane Rick has grown into a category 5 storm, with winds reaching speeds of up to 260 miles per hour.

Energy and environment ministers from the world’s major economies are met in London on Sunday to try to accelerate negotiations over an international treaty on climate change.

A former science adviser to former British Prime Minister Margaret Thatcher says that the real purpose of the United Nations Climate Change Conference in Copenhagen on December 7-18 is to use global warming as a pretext to lay the foundation for a one world government.

Russia and Iran are officially discussing the idea of dumping the dollar for international trade.

New studies are revealing that H1N1 swine flu does “unusual” damage to the lungs.

Members of the European parliament are calling for school pupils to be forced to take European Union lessons in order to counter “lies” about Brussels.

Here is something for all of us to think about: “Ten questions about flu vaccines that doctors and health authorities refuse to answer”.

Some physicists are actually asking this question: Is The Large Hadron Collider Being Sabotaged from the Future?

The mayor of Moscow, Russia is promising residents a “snow free” winter.  How will he accomplish this?  He plans to hire the Russian Air Force to spray a fine chemical mist over the clouds before they reach the capital, forcing them to dump their snow outside the city.

Now that the genie has been let out of the bottle, is it too late to close the door on genetically modified crops?

A movie entitled “Antichrist”, coming out October 23rd, is being called “the most horrific movie ever seen”.

Has Barack Obama just made it easier for China to purchase advanced missile technology from the United States?

China’s second-ranking military officer will travel to Washington later this month and U.S. military officials are promising to “show him a great deal of how our military operates in this country”.

A team of scientists funded by the U.S. Defense Advanced Research Projects Agency (DARPA) have implanted miniature neural and muscle stimulation systems into beetles to enable their flight to be remotely controlled.  Is it really such a good idea to create cyborg beetles?

DARPA is also working on developing a line of shape-shifting robots.

Are the Chinese mocking the U.S. by building a massive shopping center in the shape of the Pentagon?

The N.Y. Times is asking this question: “Is the Central Intelligence Agency covering up some dark secret about the assassination of John F. Kennedy?”  Better late than never, eh?

A super high speed global Internet devoted solely to science and education has just expanded to include half the countries of the world.

Lastly, at one high school in Chicago, 115 girls are either pregnant or have already had children.  What in the world is happening to America?