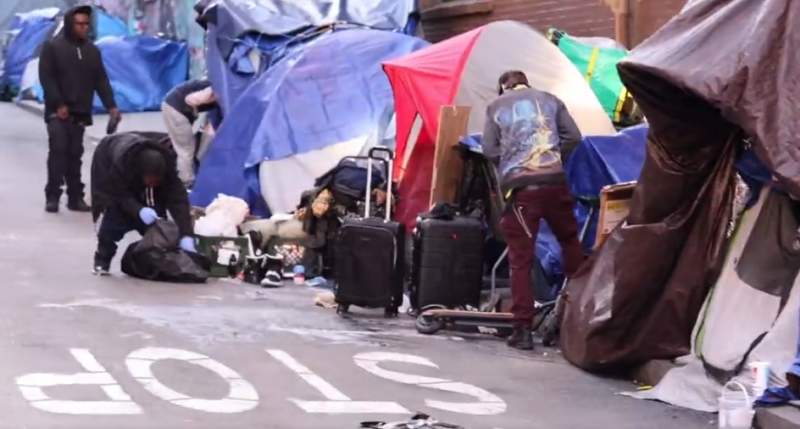 The largest cities in the United States are becoming cesspools of crime, drugs, violence and homelessness, and no matter what “solutions” our politicians come up with the problems just continue to get even worse.  Sadly, this is even happening in the wealthiest cities in the whole country.  New York City is the financial capital of the entire globe, and over the past two decades San Francisco has been swimming in giant mountains of tech industry money.  But today the streets of both cities look like something out of a post-apocalyptic horror movie.  If things are this bad while economic conditions are still relatively stable, what will those streets look like two years from now when economic conditions are far worse?

New York City has seen some pretty rough times in the past, but the Big Apple has never had as many homeless people sleeping in shelters than it does right now…

New York City’s homeless problem does not appear to be getting any better.

According to the Coalition for the Homeless, the numbers have actually hit an all-time high. They claim the average number of people sleeping in a shelter every night climbed to nearly 66,000 in October.

It is far more preferable to sleep in a shelter than it is to sleep in the streets, because violence in NYC has escalated to very frightening levels…

Fatal stabbings and slashings are up an alarming 37% in the Big Apple this year.

The NYPD has logged 96 blade-involved killings so far in 2022, compared with 70 for the same period in 2021, according to department stats obtained by The Post.

Meanwhile, the downward spiral that we are witnessing in San Francisco is incredibly alarming.

I recently watched footage of what downtown San Francisco currently looks like, and afterwards I was truly at a loss for words.

This is what the kids in San Francisco are forced to walk past everyday.

Hard drug use, drug deals, feces, needles, adults slumped over with exposed wounds and addicts suffering from mental illness screaming in the streets.

The streets are truly scary to walk down. pic.twitter.com/F9xSNJod4m

Have things really gotten this bad?

Today San Francisco has what is perhaps the most deserted major downtown in America. On any given week, office buildings are at about 40 percent of their prepandemic occupancy, while the vacancy rate has jumped to 24 percent from 5 percent since 2019.

Another major factor is drug addiction.  Right now we are witnessing the worst drug crisis in the history of the United States, and it just keeps intensifying every year.

In fact, the number of drug overdose deaths among our teens actually “doubled from 2019 to 2021”…

Drug overdose deaths among US teens doubled from 2019 to 2021 – even as use of illicit substances declined – as fentanyl fueled a nationwide crisis.

Once upon a time, the United States was such a lovely place to be.

But now our communities are degenerating into rapidly decaying hellholes and our streets are filled with violent predators.

Have you heard about a new trend called “jugging”?

From coast to coast, predators are patiently watching potential victims and they strike as “they juggle smartphones and car keys in parking lots or at home”…

A new crime trend is targeting the distracted and the elderly, with police warning about it from Alabama to California.

The big picture: Jugging involves thieves staking out unsuspecting victims at banks or retail stores before following and robbing them while they juggle smartphones and car keys in parking lots or at home.

But of course not all predators will be satisfied with just robbing you.

When a 20-year-old pregnant woman was taken in by a 36-year-old man after being kicked out of her home, she was initially relieved to have a place to stay.

But that sense of relief didn’t last long…

A 20-year-old pregnant woman was kicked out of her house around Thanksgiving. Her luck appeared to be make a holiday rebound when a stranger offered her a warm meal and a place to stay. However, this was anything but charity.

Michael Barajas, 36, is accused of subjecting the young woman to unimaginable depravities over the course of three weeks.

It turns out that this particular predator actually had his teeth filed down into sharp points.

He literally looks like he is insane, and Genesee County Sheriff Chris Swanson is describing him as “a monster”…

According to the Tri-County Times, Barajas has been charged with human trafficking, kidnapping, first-degree criminal sexual conduct, possession of methamphetamine, assault with a dangerous weapon, assault with intent to do great bodily harm, and felony possession of a firearm.

“This guy is a monster,” said Swanson. “If you look at the teeth that are filed down and the threats of ripping out a throat, I will say no more.”

Anyone with any sense never would have gone with him.

But other predators can look completely innocent.

For example, one 33-year-old man recently thought that he was pulling over to help a woman that was in trouble on the side of the road.

But once he got out of his vehicle, two men jumped out from their hiding spots and viciously attacked him…

Shortly before 11 p.m. on Wednesday, an unnamed 33-year-old man was driving along near the intersection of Hutchinson Road and South George Washington Boulevard, a rather rural area just outside Yuba City, about 40 miles north of Sacramento, when he spotted a woman standing near a black SUV on the side of the road. She flagged the man down, indicating that she was in some kind of distress.

The man pulled over and exited his vehicle to see how he could help. However, once he left his vehicle, two seemingly armed men jumped out of the woman’s SUV. One appeared to have a gun, the other had a knife. Under threat of violence, they zip-tied the driver’s legs together and stole his wallet and car keys. The three con artists then poured gasoline all over the victim and lit him on fire before they left, driving away in their own SUV and taking the victim’s car too.

This is what our country has become.

We are rapidly evolving into a “Mad Max society”, and that is because we have rejected the values that this nation was founded upon.

And if we stay on the path that we are currently on, things are only going to get worse.

Ignoring what is happening is not going to make it go away.

Social decay is systematically eating away at the foundations of our civilization, and at this point America’s decline is really starting to accelerate.