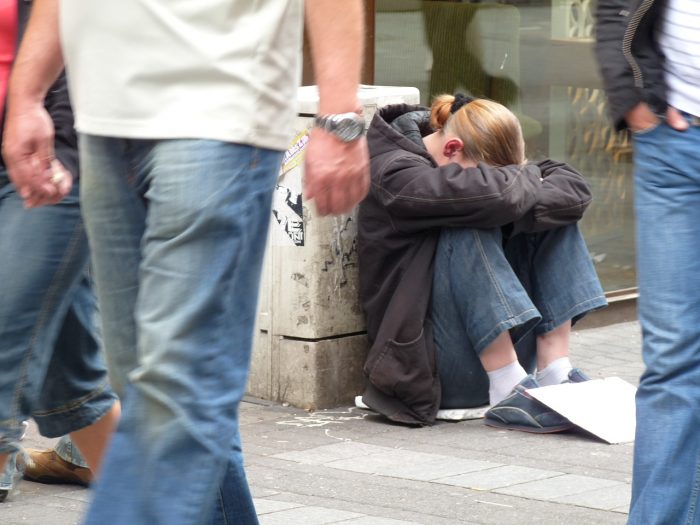 The homelessness crisis in the United States is getting a lot worse, and it is happening at a pace that is absolutely frightening. Did you realize that more than half a million Americans are homeless right now? One out of every four homeless Americans actually has a job, but thanks to rapidly rising housing prices they are not able to afford a place to live. So every night in this country, hundreds of thousands of people are sleeping in shelters, in their vehicles or on the streets. It is a national crisis that isn’t going away, and during the next economic downturn it is only going to intensify.

I have written about our exploding homelessness crisis on numerous occasions, but I had no idea that the numbers had gotten so large until I came across this article…

Recent estimates indicate that more than 550,000 people experience homelessness in the US on any given night, with about two-thirds ending up in emergency shelters or transitional housing programs, and one-third finding their way to unsheltered locations like parks, vehicles, and metro stations. According to the Urban Institute, about 25% of homeless people have jobs.

I find that it is difficult for me to wrap my head around pain and suffering on such an immense scale. Americans often think of the homeless as drug-addicted men that don’t want to work, but the truth is that about a quarter of the homeless population is made up of children.

And things are getting particularly bad on both the east and west coasts.

Recently, Jake Tapper of CNN confronted Los Angeles Mayor Eric Garcetti about the fact that homelessness in his city has risen by 50 percent…

You were screamed at for four hours this week at a town hall on homelessness. Homelessness is nearly up 50 percent in your city since you became mayor, according to the Los Angeles Times. Now there’s a typhus outbreak likely due to the booming number of rats attracted by all the food and human waste on Skid Row and other places. Some critics may be saying why are you campaigning for Democrats in the midterms and traveling when you have this huge crisis in your backyard?

If the U.S. economy really was “booming”, the truth is that homelessness in Los Angeles would not be up by 50 percent. This is how Garcetti responded to Tapper’s question…

I think they’re linked together and I welcome a national conversation in Washington, D.C. where you see more homeless per capita, than you see in Seattle, in San Francisco, you see in red and blue cities. We have a a mental health crisis. Mayors can’t avoid that. A lot of people told me never touch the issue of homelessness. I am so passionate about it. People are dying on our streets from opioid addiction. I’m so proud of our voters in Los Angeles who passed two largest matters to combat homelessness. This is what people say is an unsolvable problem and I’m committed to solving it.

He is committed to “solving” this crisis, and yet it has gotten 50 percent worse while he has been mayor?

And this guy dreams of someday becoming president?

It can be argued that things are even worse in San Francisco. Thanks in large part to mountains of dirty needless and human feces, the city now spends 65 million dollars a year cleaning up the streets…

I know that San Francisco has become known as the human feces capital of the country, but somebody is still getting fleeced on that deal.

If San Francisco wants to give me 65 million dollars a year, I will make sure that their streets are clean enough to eat dinner on, and I will install fresh smelling flowers on every street corner.

Whoever is getting the 65 million dollars right now is doing an absolutely terrible job, because there are literally piles of poop all over the place. In fact, one recent investigation found 300 piles of human feces in downtown San Francisco alone.

Meanwhile, things have gotten so bad in Seattle that one official is proposing to spend 3 million dollars on a “mass shelter tent”…

At the urging of local public health officials, Councilmember Teresa Mosqueda is proposing that the city of Seattle spend $3 million to open a “mass shelter tent” with 75 to 100 temporary beds for people living on the street.

Announced as part of the Seattle City Council’s ongoing budget deliberations, the request only includes the capital cost of setting up the tent, not the operating costs. City officials estimate it would cost an additional $2 million to run, likely bringing the total up to around $5 million for the year.

Once again, this seems like an enormous waste of money.

And so what is going to happen when these cities have tens of thousands of people sleeping in the streets during the next economic downturn?

The homelessness crisis continues to escalate on the east coast as well. In New York, the percentage of New York City students that are homeless has doubled over the last decade…

Data from the New York State Techincal and Education Assistance Center for Homeless Students (NYS-TEACHS), a project of Advocates for Children of New York (AFC), revealed a record 114,659 students were in temporary housing for the 2017-18 school year, up almost 3% from 111,562 in the 2016-17 year.

That equates to roughly 10% of all students enrolled in NYC schools are homeless. The figure is so shocking that it is more than double the rate from the GFC 2007-08 era.

Government studies have shown that students without homes “are less likely to meet grade-level standards for reading and math, and graduate from high school on time,” said New York Daily News.

And in New Jersey, homelessness is up 9 percent compared to last year…

According to just-released data compiled by the U.S. Department of Housing and Urban Development, there are 9,303 men, women and children who are homeless in New Jersey this year, which is a 9 percent increase from 2017.

The mainstream media keeps touting how well the U.S. economy is doing, but if that was really accurate we wouldn’t be seeing numbers like these.

Of 3,007 counties in the US, a worker earning the federal minimum wage of $7.25 per hour can afford a one-bedroom rental in only 12. In San Francisco, where the median house price is over $1.5 million, a single mother earning the minimum wage would have to work 120 hours per week to meet her basic needs. And even outside of high-cost regions, nearly two-thirds of US households lack the savings to cover a $500 shock such as a car repair or health-care expense. For these families, one bad turn can result in homelessness.

The cost of living has been surging year after year, and our wages have not even come close to keeping up. For much more on this, please see my previous article entitled “Middle Class Destroyed: 50 Percent Of All American Workers Make Less Than $30,533 A Year”.

If the things that you have read in this article have made you angry, that is good, because people should be getting very angry about our exploding homelessness crisis.

Hundreds of thousands of people are deeply suffering in this country every single night, and that should not be happening in the greatest nation on the planet.

Unfortunately, most of our politicians are all talk and no action, and the homelessness crisis is likely to get a whole lot worse as the U.S. economy continues to deteriorate.