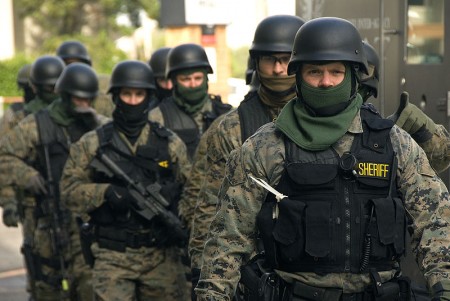 The number of SWAT team raids in the United States every year is now more than 25 times higher than it was back in 1980. As America has conducted wars overseas in recent years, our police forces have become increasingly militarized as well. And without a doubt, many of our cities have become much more dangerous places. Thanks to relentless illegal immigration, drug cartels are thriving and there are now at least 1.4 million gang members living in the United States. But there are many that believe that the militarization of our police forces has gone way too far. Almost weekly, SWAT team brutality somewhere in America makes national headlines. You are about to read about a couple of horrific examples of this below. Once upon a time, police in America were helpful and friendly and the public generally trusted them. But now our police forces are being transformed into military-style units that often act like they are in the middle of Iraq or Afghanistan. The following are 10 facts about the SWATification of America that everyone should know…

And thanks to the wars in Iraq and Afghanistan, police forces all over the nation are being showered with billions of dollars of military equipment that is coming home from overseas. The following is what a recent Time Magazine article had to say about this phenomenon…

As the Iraq and Afghanistan wars have wound down, police departments have been obtaining military equipment, vehicles and uniforms that have flowed directly from the Department of Defense. According to a new report by the ACLU, the federal government has funneled $4.3 billion of military property to law enforcement agencies since the late 1990s, including $450 million worth in 2013. Five hundred law enforcement agencies have received Mine Resistant Ambush Protected (MRAP) vehicles, built to withstand bomb blasts. More than 15,000 items of military protective equipment and “battle dress uniforms,” or fatigues worn by the U.S. Army, have been transferred. The report includes details of police agencies in towns like North Little Rock, Ark., (pop: 62,000), which has 34 automatic and semi-automatic rifles, a Mamba tactical vehicle and two MARCbots, which are armed robots designed for use in Afghanistan.

For example, just check out what happened when a SWAT team in Florida raided the home of one young couple earlier this month…

That is the kind of thing that I would expect to happen in Nazi Germany, not the United States of America.

But this next example is even more horrifying. The following is what one mother says happened to her 2-year-old son when a SWAT team raided her home…

After the SWAT team broke down the door, they threw a flashbang grenade inside. It landed in my son’s crib.

Flashbang grenades were created for soldiers to use during battle. When they explode, the noise is so loud and the flash is so bright that anyone close by is temporarily blinded and deafened. It’s been three weeks since the flashbang exploded next to my sleeping baby, and he’s still covered in burns.

There’s still a hole in his chest that exposes his ribs. At least that’s what I’ve been told; I’m afraid to look.

My husband’s nephew, the one they were looking for, wasn’t there. He doesn’t even live in that house. After breaking down the door, throwing my husband to the ground, and screaming at my children, the officers – armed with M16s – filed through the house like they were playing war. They searched for drugs and never found any.

I heard my baby wailing and asked one of the officers to let me hold him. He screamed at me to sit down and shut up and blocked my view, so I couldn’t see my son. I could see a singed crib. And I could see a pool of blood. The officers yelled at me to calm down and told me my son was fine, that he’d just lost a tooth.

That young child is probably going to be disfigured for the rest of his life because of the brutality and the carelessness of that SWAT team.

Yes, we live in perilous times and many of our communities would rapidly descend into anarchy if there were no police.

But that does not mean that they have to act like Nazis. They should be able to protect us while treating us with dignity and respect at the same time.